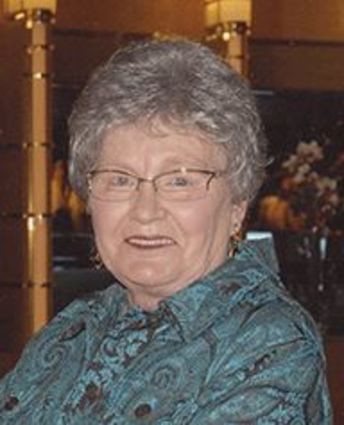 Angel-Williams passed away from natural causes October 2, 2017 surrounded by her loving family and dear friends at the Big Sandy Medical Center. A Memorial Service was held on Monday, October 9, 2017 at 11:00 a.m. at Christ Lutheran Church in Big Sandy; burial followed at the Big Sandy Cemetery. Holland and Bonine Funeral Home has been entrusted with services and arrangements. Please visit Joanne's online memorial page and leave a message of condolence for her family at http://www.hollandbonine.com.

Joanne was born February 21, 1933 in Brookes, SD to Carl and Agnes Angel. The Angel family moved to Havre, MT where Joanne spent her childhood. As a young girl, Joanne attended the Cleveland Rodeo where she met a Warrick cowboy and love of her life, Ray Williams.

Not long after this meeting, while still teenagers, Ray and Joanne married and began building their family. From the beginning of their marriage and throughout their lives, Ray and Joanne lived on the simple principals of Faith, Family and Hard work.

While her husband worked as a ranch hand, Joanne became the cook for all the cowboys on the ranch. Although her father was a chef, Joanne was young, didn't have much knowledge of the kitchen and was challenged to prepare meals in a small trailer house kitchen that had no electricity or running water. Nonetheless, Joanne had a natural gift for cooking and soon became a self trained master meal maker and baker. As the Williams family moved around the state with Ray's construction work, Joanne continued to use these skills to provide meals for friends and family. She loved to share her gift of delicious food; no matter how little they had Joanne made sure there was always enough to share.

In 1963 the Williams family settled in the place they would call their forever home, Big Sandy. While raising a family of four children, Joanne began to help make ends meet by working as a cook at the "Y" and Vet's Cafes and later became the head of the Dietary Department at the Big Sandy Medical Center, where she worked for 22 years. Joanne's days were filled with hard work, after her children were raised, she helped raise each one of her grandchildren. If she wasn't working her "formal job", she was babysitting and cooking for her grandkids. She was the primary host and cook for every family holiday and instigated many weekend card parties (she loved both pinochle and poker!). She attended every athletic event and activity her kids and grandkids participated in. No achievement of a child or grandchild was too small to celebrate, family was Joanne's life. She taught her children and grandchildren about the importance of family and hard work through her own actions.

Joanne loved her community and the people in it and did her best to display this love through giving back to the community. Joanne was a lifelong member of Christ Lutheran Church, Board Member of Big Sandy Senior Citizen Center, received the Senior Citizen of the Year Award for the North Central Region in 2006 and was awarded Manager of the Year in 1998 for the multi-family living facility she lived in and managed. In 2016 Joanne chose to move into the Big Sandy Medical Center, were she resided until her passing. She considered BSMC her home and the staff there her family.

Joanne will be deeply missed but never forgotten by her friends and family. Joanne was preceeded in death by her parents Carl and Agnes; Brothers Don Angel and Jack Angel; sister Farrell Jamison and loving husband of 55 years, Ray Williams.

After the loss of her husband, Joanne found much comfort in her faith and love for reading. Her wish was for memorials to be made in her honor to Christ Lutheran Church, Big Sandy Library or the memorial of one's choice.