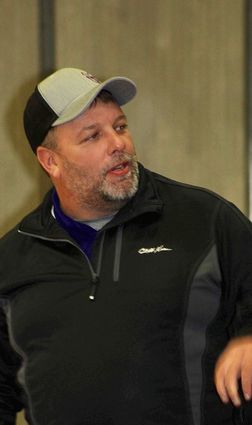 Colby Cline is the head coach of the Big Sandy Wrestling team. Colby started wrestling when he was 5 years old. He has been involved with coaching wrestling for 20 years. Colby wrestled for Fort Benton when Shawn Webster wrestled for Big Sandy.

Cline loves the sport of wrestling and wants his wrestlers to enjoy the sport he loves. He hopes however the boys will learn more than that and gain from the experience of wrestling tools that will help them for the rest of their lives.

"I want them to be respectful and learn to battle through things--even adversities. I think that is what wrestling is the whole time they're out there on the mat. It is adversity out there and how you deal with overcoming the obstacles. I think this translate into life. I think wrestling in one of those sports where I can learn a lot about the kids on how they approach the obstacles. I can tell what they are going to do in life, by what they do in the wrestling room. I know who I want to work for me, if I were ever hiring, by watching their response to the matches. When it gets tough do they want to quit?"

Times are different now than when he was wrestling, the rules have created a safer environment. They are much stricter now making sure throws won't hurt shoulders and backs. You can't slap them in the face any more. It is a more controlled environment.

There were 53 teams at the CMR tournament a few weeks ago. All classes were represented. Coach Cline was impressed with the three athletics that represented Big Sandy. "Weston Allderdice wrestled really well. He held his own. He looked really good last weekend. Dillon Darlington, as a senior, going out for the first time. I'm really impressed with him. He has worked hard losing weight to get down to the lower weight class, and Dillin Geyer is learning there is a little speed different between JR high and high school. But he's working hard. I'm impressed with him too, because he's wants to learn. He has a good work ethic.