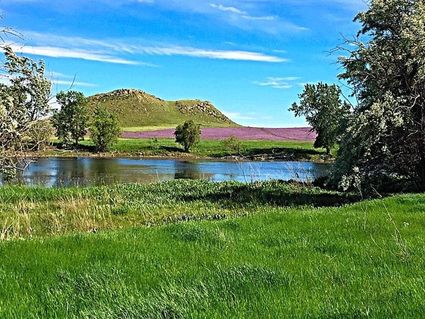 The best tasting honey in the world is from Big Sandy Montana! Ken Yirsa and his family planted 100 acres of Hairy Vetch the first year they tried it in their crop rotation. Hairy Vetch, is a moderately winter-hardy species. It is the only vetch species that can be fall-seeded and reach maturity the following July. It is a legume, grown as a forage crop, fodder crop, cover crop, and green manure. Hairy vetch as a legume is used primarily for soil improvement. During that first year the Yirsas noticed there were plenty of bees in the neighborhood pollinating the crop. Hairy Vetch has an intense purple flower before it produces its seed. "We expanded the next year and we discovered there weren't any bugs out. We wondered if the Hairy Vetch needed to be pollinated and sure enough it has to have bees!" They looked at all the acres they had planted and said this is going to be a flop! Yirsas researched it and after looking around the state to try and find someone that could supply that many bees they connected with Jim Savoy of Treasure State Honey in Fort Shaw. He put up 600-700 colonies with 30,000 bees in each one.

The honey made on the Yirsa's Hairy Vetch took first place, in their category in the world! The Announcement which will be official made in February reads. "2017 Apimondia--Held every other year in countries around the world since 1897 and this year held in Istanbul Turkey. The name Apinondia is a compound word made from two words; api, referring to honey bees and mondia, referring to the world. Apimondia maintains seven scientific commissions and five regional commissions for the purposes of furthering scientific understanding of apiculture and facilitate exchange of information. Apinondia or International Federations of Beekeepers Associations promotes scientific ecological, social and economic apicultural development in all countries and the cooperation of beekeeper's associations, scientific bodies and of individuals involved in apiculture worldwide. There

were 13,000 participants from 128 countries, 350 exhibitors at the Honey Show. There were 170 countries registered in the contest and the Turkish organizers received nearly 400 honey samples from all around the world. There were two main categories, individual and commercial." It went on to list the first-place awards in five categories before it read, "The first place for granulated honey was awarded to Jim Savoy from the USA".

Jim Savoy bought Montana Treasure State Honey in 2011 and is the third owner of Treasure State Honey, all who have been Montana residence. Preacher Baldwin formed the company back in the early 1900's. The next owners were John and Shirley Barrow from eastern Montana. The first two owners put their honey in barrels and sold it to the packers. Jim grew up eating this honey all his life. He worked with John and he thought it was so fascinating. Jim always knew Montana had great honey. After he bought Treasure State Honey he thought the honey was too good to have it blended off with lower quality honey, which is what packers do. Some of the honey which is blended comes from out of the USA just so they could make cheaper honey. USDA allows honey to be declared USA honey even if it has only 51% of the honey from the United States, so by blending great honey off with poorer quality honey allows for cheaper retail prices.

After Jim tasted the Hairy Vetch honey before he brought it to Ken who was sitting in the pickup, because there were way too many bees outside. Jim thought "This is very good honey. It had very mild flavor and most people like mild honey, 99%of the people like it mild. It had a very unique flavor." Montana Treasure State Honey has bee colonies in Cascade, Judith Basin, and Chouteau Counties and he knows good honey. They produce 150,000-200,000 pounds of honey all unheated and unfiltered every year. Jim "likes high quality honey, and this was better than any of our other jarred honey." As a Montana based company "we are proud of the fact that we can stand on the world stage and be recognized".

You can purchase the honey from Yirsa Farms on Facebook or at cyirsa@yirsafarms.com, also at treasurestatehoney.com.