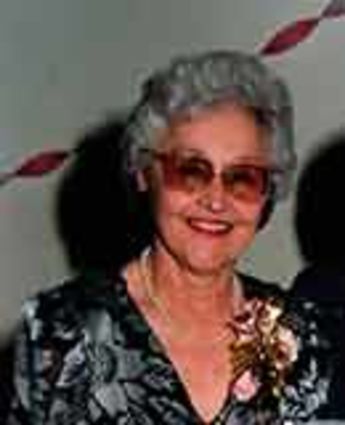 Helen Nepil passed away Friday January 26,2018. She was born on January 15, 1923 to Jacob and Emilie Sevick on the family homestead, which was located 35 miles southeast of Big Sandy, Montana. She was the youngest of six children, with 2 brothers (Laddie and Adolph) and 2 sisters (Marie and Lilly). Another sister, Emilie died of whooping cough at 2 years of age. Her parents had immigrated to Chicago from Czechoslovakia, where they owned a bakery. In 1914 they moved to Montana to become farmers. She attended grade school at Illiad school, which was a one-room schoolhouse. Helen was five years of age when she rode her horse Dolly, two miles to school each day. She required help from the teacher and older students to get on and off her horse but by 12 years of age, she was riding alone in the Missouri River Breaks moving cattle to water every day.

She attended high school in Billings, Montana and married her sweetheart, Laddie Nepil at age 19. They started as dance partners at the country dance, and soon became life partners on January 17, 1942. This partnership would last 56 years. It was built on a foundation of love, kindness and caring, and out of it blossomed five children. They farmed 11 miles from her parent's homestead. The family moved to Big Sandy, Montana in 1956 where Laddie, in addition to farming, was a builder. They sold the farm on August 30, 1967 and then lived in Big Sandy until 1973 before moving to Corvallis, Oregon.

Helen, like her parents, was a talented cook and baker. She became a Catholic as a teenager, and has maintained a strong faith throughout her life. Helen held many leadership positions within church and her children's school. She considered her role as Wife and Mother to be her most important role in life. After moving to Corvallis, she worked at the OSU Bookstore for 12 years, until her retirement at 72. She enjoyed entertaining, china painting, playing bridge, bowling, dancing, travelling to visit her children and grandchildren and listening to Laddie sing "You Are My Sunshine". Laddie and Helen celebrated many happy years until he passed away February 10, 1998.

In August of 2003, she moved to Gunnison, Colorado where she lived in her own home until moving into the Willows after several falls. She walked daily, played bridge, danced and attended church and other social functions until her declining health in late 2017. Helen worked with Interfaith Volunteer Caregivers for 16 years, Hospice of Gunnison, Colorado, St. Peter's Altar/Rosary, and the Pioneer Museum. She is survived by her 5 children and their spouses, Marjorie O'Reilly (David), Carol Anne Nelson (Vern), Loretta Johnson (Duane), Lorraine Larson (Doug), and Darell Nepil (Mary), 10 grandchildren, 19 great grandchildren (plus 2 on the way), and 2 great-great grandchildren. She was proceeded in death by her husband Laddie of 56 years, her parents, three sisters, two brothers, and a granddaughter. Helen's funeral was held February 3rd at St. Peter's Catholic Church in Gunnison , Co. In lieu of flowers, donations may be sent to Gunnison Valley Health Hospice, 120 North Boulevard, Gunnison, CO 81230 or Willows Assisted Living, 300 N 3rd St, Gunnison, CO 81230.