Big Sandy girls, boys seasons come to an end at the District 9C 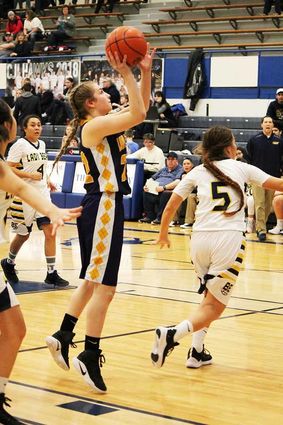 Sophomore Amanda Cline (22) gets a shot off against the Box Elder Bears Thursday afternoon during play at the District 9C Tournament played at the Havre High Gymnasium.

The Big Sandy boys and girls basketball teams competed, start to finish every game they played this season and after this weekends District 9C tournament in Havre it is now over with.

The girls entered the tournament as the No. 8 Seed and opened play against the No. 1 seeded Box Elder Bears on Thursday afternoon.

Big Sandy played a spirited game throughout and were down just 19-9 after eight minutes to the top ranked Bears.

Box Elder began to take control in the second, outscoring the Pioneers 20-5. Big Sandy would lose the contest 66-25.