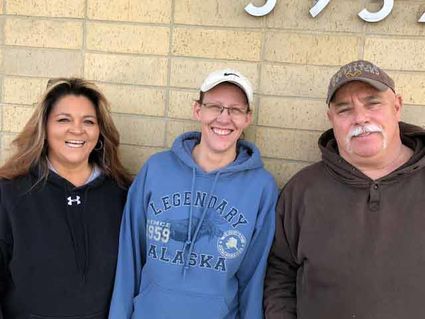 Sheri Roth, Big Sandy's Post Master, says mail route carriers must make an attempt to deliver mail. An attempt, but at no time are they to put themselves at risk. Safety is the number one point at every training conference. Having said that the three Big Sandy Mail Carriers have had quite a year this winter. Tina Cook, Barbie Martin and Dennis Young either smiled or laughed out loud when asked about this year's attempts.

Tina Cook has worked for the post office for nine years but has only been delivering mail on Rural Route 1, or the Prairie Route for 3 1/2 years. She travels 140 miles a day. She drives through town before starting the prairie route. Afterwards she goes to Box Elder, loads up again before she does the Box Elder lower road and the Larado Road. A six-day route must have 140 mail boxes on the route. If there isn't that many people on the route the mail can only be delivered three days a week. Tina travels 140 miles six days a week. It takes her six hours, when the route is in good shape, lately it takes eight hours to complete the route. She's been stuck on an average of two times a week. Laughing she says sometimes she gets stuck four times a week. The longest stretch of days when she hasn't gotten stuck is three! Tina says, "My new best friend is my towrope". It's a long list of people who have pulled her out this year which she just can't thank enough. "Throw Nona Danreuther in there she's the best sub." She told me if mailboxes are not shoveled out she doesn't have to deliver to them, but she does. She hikes through the snow.

Barbie Martin doesn't remember how many years she has been a mail carrier, "maybe about 10 years". Barbie does the Southeast Route travelling 133 miles Monday, Wednesday and Friday. When the roads are good it takes her 4 hours to complete the route and then she laughs. When asked how many times she has been stuck this year she just laughs more and then says, "I have no idea!" She has followed Pete Jerrell on the county road plow but that process took too long.

Dennis Young has the Warrick and Coal Mine route. He travels 142 miles three days a week. It normally takes 4 ½ hours but lately it takes 6 ½ hours. He really likes the people on the route. They watch out for him and help pull him out when he gets stuck and the scenery is incredible. He lives closer to Havre then Big Sandy but "Sheri and the girls are just top notch."

All three realize mail is the life line for people living in the country. So, it is important that every attempt be made to deliver the mail. They have called and asked the county commissioner, Darin Schuster, to help by plowing the roads when it was an emergency to deliver medications to a customer. They don't take it lightly when they can't deliver the mail.

Saying thank you to your mail carriers should be done especially this year with a simple Thank You note. They are "permitted to accept a gift worth $20 or less from a customer per occasion, such as Christmas. However, cash and cash equivalents, such as checks or gift cards that can be exchanged for cash, must never be accepted in any amount. Furthermore, no employee may accept more than $50 worth of gifts from any one customer in any one calendar year period".