"Wild Safari" Rotary 2018 was a Giant success again this year 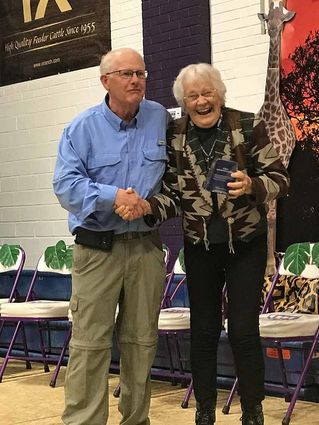 The 34th annual Big Sandy Rotary Banquet, Wild Safari Night, is over and Connie Green is the winner of the grand prize of $3,000, but really everybody wins! To date, over $600,000 has been returned to the Big Sandy Community from proceeds of the last 33 Benefit Banquets. Farmers and ranchers, who could leave their calving operations, fought through horrible muddy roads, with mountains of snow still along the sides. The true Irish were wearing green for Saint Patrick's Day, while others wore clothes in the Safari theme. However, Andy and Peggy Labuda, who won $50 for the best costume came dressed as gorillas. "In the village, the quiet village the lion sleeps tonight" and African tribal music played in the background. Decorated by Cheetah print table clothes with large cardboard cutouts of lions, zebras, giraffes, apes, and tigers were around the gym.

The president of the Big Sandy Rotary Club Sheri Moore announced we could eat salad. I was first in line and before the long lines developed, but really did anyone care. It was after all a time to visit with friends and celebrate our community. Long winter days and nights, stuck in the snow to many times to count, made this night a long overdue celebration. The menu was a choice of three different salads, three different desserts, and a prime rib meal. Three hundred and sixty people were served in 32 minutes. Baumgardner Catering of Loma served the meal again this year. She has it down to a science.

The junior class helped by serving. The boys when asked if they like serving, just shook their shoulders, smiled, and said "It's all right." They were doing a good job as I watched them interact and laugh with everyone as they served. Young and old couples supporting the Rotary came to have a good meal, visit with friends in hopes of winning the big prize. There were belly laughs, and heartfelt hugs. While the line passed I heard men talking about still working with pregnant cows. Women talking about their jewelry, and then some men yelling across three tables- "Hey, how are you?" Watching them get up from their tables and shaking hands and laughing. People catching up on families and what all they were doing, others talking taxes, city council discussions, and then a few strangers being asked the question, "Where are you from?" There was a slide show of children and their activities that Rotary supports.

Father Pete Guthneck opened with an inspiring invocation and then Rotary acknowledge and thanked Bob Nelson. Whatever Rotary may mean to our community, it will be known by the hard work and dedication of Bob Nelson. He has been a member of Rotary since 1983 and is an integral part of making the Big Sandy Rotary Club's ventures successful over the last 34 years. Whenever someone needs an extra person to help Bob is quick to volunteer and always strives to make sure the job is done right. Bob has been instrumental in all of the upgrades at Sheehy Park and has worked tirelessly to make sure that Big Sandy Rotary Club's projects are successful. Bob's many accomplishments through Rotary have been important to our community and to the Big Sandy Rotary Club. Thank you Sir! Even a person in

the audience said, "Bob is Mr. Rotarian! He's all about service." Bob responded by simply saying it wasn't him, it was the organization who services the community. He told the audience that Rotary is currently working on three projects, a directory that is accessible to everyone in the cemetery, a "walking/running" path, and in the future, they'll be hanging up patriotic banners down town.

There were 68 door prizes, 41 raffle tickets and 41 silent auction items. Although many people donated more than one item it still means there were 109 items given, many of them incredible prizes. Surprisingly one of the fun highlights of the night was the heads or tails game. Robin Pearson flipped seven heads in a row before the flip of one tail winning the game for Patti Hannum.

The main winners were: 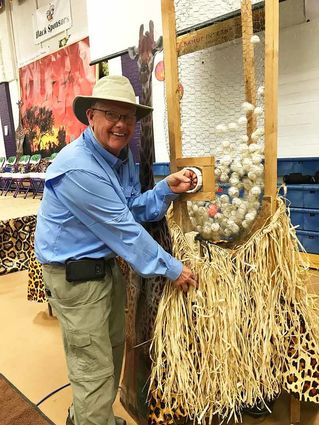 Chair five was Connie Green who was the big winner of $3,000;

Chair eight: Helen Richter winning the Cell Phone Booster and because she bought a multiplier she got $100 as well;

The final Grand Door Prize which was $1,000 set of tires was won by Charley Overbay.

We own a better community.