There is Easter and then there is EASTER 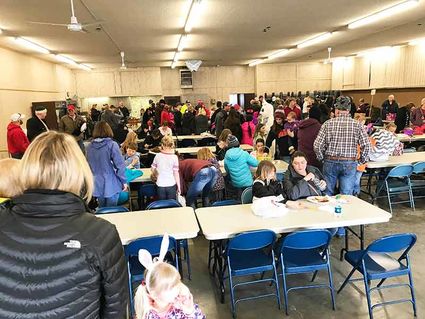 The wind chill factor was zero and it was snowing out so the Easter Bunny asked Rotary if they would please move their annual Easter Egg Hunt indoors this year. She wanted to visit with the kids and felt it was too cold outside for the little ones.

So, the annual Easter Egg Hunt was held inside city hall at 11:00 with Bob Nelson giving the count down. The fire alarm from a fire truck which usually triggers the start of the hunt, was missing so the entire community members started making the alarm noise themselves while the children went up to the tables. Every child was encouraged to take has much candy as they wanted and to take one of every toy the Easter Bunny brought with her.

The discussion was when did the Rotary Easter Egg Hunt start. Each Rotarian remembered it was already a tradition by the time they had joined, and then Raymond Courtnage told me he remembered when he was a boy in the late 1950's the Rotarians would come to his house and boil and dye eggs the day before. His father, Don, was a Rotarian and with the help of his wife Helen, and the rest of the Rotarians they boiled 130 dozen eggs.

That means 1,560 eggs were dyed the day before in preparation of the Easter Egg Hunt the next day. Ray told me he remembers sitting on the back of a motorcycle, backward so he could drop colored eggs onto the prairie the morning of the hunt. Dr. Murphy use to donate oranges instead of candy. The Rotary Easter Egg Hunt is 60+ years old. A tradition that old means everyone who lives in Big Sandy is aware of its existence.

Rotary was formed in November 1950 and although no one actually knows the year they started the Easter Egg Hunt it must have been one of the events that they first supported. Grandchildren and cousins travel to Big Sandy every year to participate in the annual event and have for years. This year the weather didn't make it feel like a Spring ritual, but the enthusiasms was real.

How did the Easter Bunny come to be a symbol of Easter? The "Easter Hare" originated with German Lutherans. Like Santa Clause it judged the children to see if they were good or disobedient at the start of Eastertide.

The Easter bunny came to America in the 1700s when German immigrants settled in Pennsylvania.

The Easter bunny was an egg-laying hare called "Osterhase" or "Oschter Haws." The children made nests for the Easter Bunny to lay their multi-colored eggs in along with little toys and candy, the first Easter Baskets.

The first mention of the Easter Bunny was written by a German Doctor, Johannes Richier. In a 16 page essays published in Germany in 1682. He was concerned that, "the young people often lose their health with Easter eggs because they avidly swallow up the eggs without salt,

butter or any other flavoring resulting in nasty tummy aches."

The hollow chocolate bunnies are a by-product of WWII cocoa rationing. The Smithsonian magazine said they were created in the 19th century in Germany. Gourmet.com states that these treats were hidden for kids to find around springtime to commemorate the season. Whitman's Chocolates made chocolate bunnies in the mid 1800s, but they didn't become popular until 1890 when Robert Strohecker had the first five-foot-tall chocolate bunny in his drug store. In the 20th century chocolate molds were easier to come by and chocolate bunnies grew at a very quick rate. SweetCityCandy.com says we buy more than 60 million chocolate bunnies each year for a total of $1.9 billion. YumSugar.com tells us that 76 percent start eating the chocolate bunnies at the top. Eating the ears first.

Easter and April Fool's Day followed on the same day this year. According to Steve Edwards of the Blaine County Journal, "Easter must always be on the Sunday that falls on the next full moon after Spring Equinox. That means Easter can fall as early as March and as late as April or May. The date for Easter always varies while April Fools' Day is always the same date and that's why the two so rarely occur together." 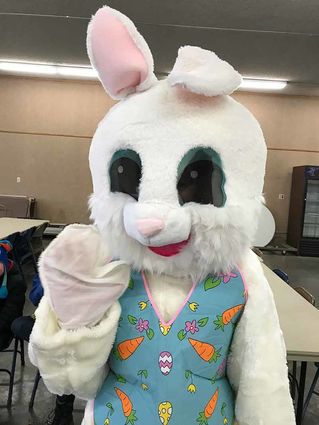 For Christians, Easter is a time to celebrate the power of the resurrection of Jesus Christ, and acknowledge the very power that created the earth now lives within each believer. Easter is the whole reason Christians believe, God is alive. For those Christians, you'll often hear comments like these: I love Easter because, "The newness-New beginnings." "Besides an excuse to get family together again, it's the resurrection of Jesus." "I like teaching my boys about the story of Jesus and Easter." "The best, best thing, He's Alive! He's not a dead savior. He's Alive. That makes it different than anybody else ever. Different than any other day. It is why I can go on day after day after day. Because if you take a look around this world, and I hate to be a pessimist, there isn't a whole lot here that would keep me here, but I know there is a place better than this"