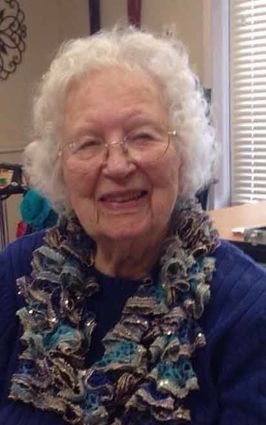 Margaret Grubb was born April 22, 1918 and will be 100 years old on her birthday. What a birthday party that will be! With a lot of laughter Margaret and her two daughters Shirley and Carol sat down to remember just the smallest pieces of information. Margaret was born in the town of Big Sandy at home.

According to Joe Balazic, her brother who wrote in the Gathering of Memories, her father, Martin F. Balazic learned the shoemaker trade in Austria before he arrived in the United State on September 19, 1907 where he met Margaret's mother Marija Frasz in Chicago and they were married June 15, 1909. Margaret's first brother and sister who were twins, John and Mary, both died of influenza. There was a second set of twins, John and Martin, who were the oldest of her eight brothers and sisters. The remaining six siblings were born in Big Sandy. Frank, Anna, Margaret, Rosalie, Tony and Joe. She remembers not having indoor plumbing or electricity, "We used a washboard." Three sisters slept together and the family used kerosene lamps. If they got presents it was usually something like oranges.

She graduated in 1937 from Big Sandy High School in the big brick building, "it isn't there now". She married Joel Grubb in 1938. Margaret met Joel when she went to stay with her sister Anna in Missoula. They had five children: Shirley, Skip and Doug live here in Big Sandy and Carol and Tom live in Eugene Oregon. Her husband ran the elevator in Virgelle for awhile. Afterwards Joel worked for Fred and George Schlack before they took over brother Mick's farm, four miles southwest of town. She took a course in nursing and became an LPN in 1968. "I was a nurse for 25 years." Margaret feels she was a very good nurse, compassionate and caring. She had a stroke and had to retire from nursing in 1972 when she was 70 years old. Her husband passed away in 1997. Margaret has been a widow for 21 years. She lived in their home for a number of years but then moved into Centennial Lodge and lived there for 13 more years before, "I got to where I couldn't take care of myself so on January 18, 2018 I moved into the nursing home at 99 years old." She likes it there because she, "doesn't have to cook", and she "doesn't have to clean". It has lots of activities and friends.

The biggest change in 100 years is the electronics. "I didn't have one of those things", as she points to my cell phone. Thinking about it, it really is one of the biggest changes, from no electricity at all to a gadget you hold in your hand that connects you to anyone one with a voice command, takes pictures, alters pictures, has a clock, a timer, a stopwatch, an alarm, a scanner, connects you to the world wide web, you can look up any information, read any book, talk to a computer and ask it to spell a word for you. You can send messages to anyone, and record a conversation. The computer in the phone can remind you to do a task and if that is to call someone, and actually make the call for you. She remembers she loved writing letters and had beautiful handwriting, but with a cell phone it isn't necessary now. She was proud that she got a scholastic letter for typing.

She was a prom queen, remembering, "I was a nobody, but they liked me."

You can easily see her secrets for a long life in the advice she would give women, its repeated to every generation. Her advice to a young girl, "learn how to do everything. Keep learning new things. Use your brain! Experiment." And her advice to a young women who is just about to get married, "You both have to be equal together! It's important you keep on learning new things." And lastly her most important advice to a woman who is going to retire soon, "Start something new. Keep active." When she was in her 80's she would go to the gym and lift weights with Francis Ostrom. "You have to keep your bones strong. Walk! Walk! Walk! Keep active". She kept her mind active too. Her daughters mentioned she kept bowling score for 40 years. Keeping her mind keen by adding up all those scores. 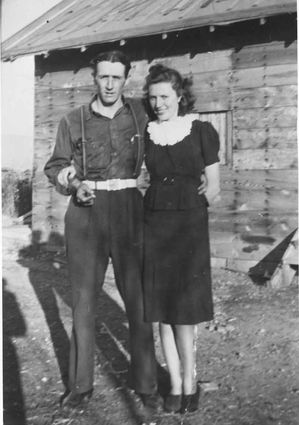 I asked Margaret what her secret was for such a long life. "I don't know it went by so fast!" She smiles and shrugs a little, "Eat right, be physically active, kept their minds active. Keep your hands and your feet moving. DON'T Smoke. Don't over drink." I just had to know, what is your favorite food? Margaret kind of sang her answer, "I like it all!"

Margaret has been invited to a luncheon honoring Centenarians in September with Governor Bullock. She's lived in Montana her whole life and here in Big Sandy for 95 years. Margaret remembers her first visit to the ocean. She also went to Slovenia the old country, but she loves Big Sandy.

Happy Birthday Margaret! One of the wisest women of any generation. Stay Active!