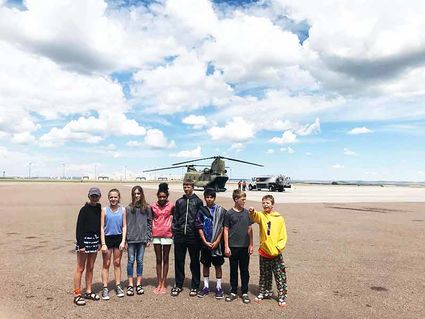 ictured are about half of the Big Sandy campers that were picked up at C Bar N camp last week in a National Guard helicopter do to massive flooding around Augusta. l to r: Evalina Wagoner, Mattie Gasvoda, Amy Gasvoda, Malasia Phillips, Kody Strutz, Lane Demontiney, Rusty Gasvoda, and Tannin Baumann. Campers that are not pictures who enjoyed the ride were Tosha Allderdice, Jake Darlington, Teagen Cochran, Kodi-Jo Phillips, and Lainey Terry.

Everybody should know by now that the Montana Army National Guard used two Chinook helicopters to rescue Big Sandy kids who were attending Montana Wilderness School of the Bible. The Dearborn River southwest of Augusta flooded and destroyed the road making it necessary to close the road and evacuate campers and staff who were stranded. There were 100 teenagers and 37 staff members attending the camp run by C Bar N Ministries.

During the storm and while at camp the kids were never told of the circumstance below them. They were high enough they never experienced any flooding. The first t...