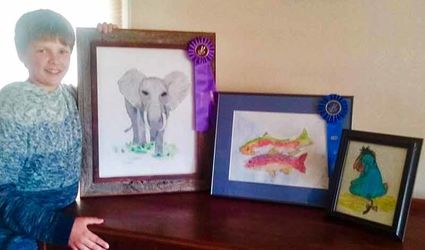 Jack Gollehan, son of Rob and Mindy Gollehan currently residing in Helena, but who lived in Big Sandy a year ago, is well on his way to a career as an artist. Although he is just a six-grader next fall he has already won two major art awards. First, he won second in the postcard contest for United Way state wide. The theme was Change the World The United Way and he drew pictures of some recycling efforts, a van with Meal on Wheels on the side, and a building that says' "educate everyone". His art will be on the postcard used by United Way. Lt. Governor Mike Cooney presented him with h...