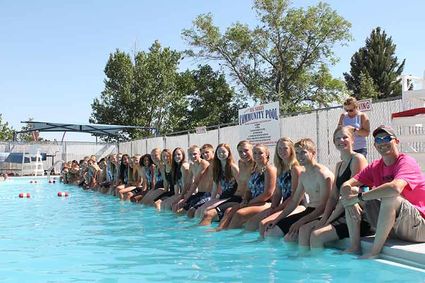 The swim meet in Fort Benton is a two-day event like every swim meet competition weekend. This meet had 380 participants from 12 towns. The city park is scattered with tents, and around the edge numerous trailers with air conditioning, which is really good because at 92 degrees it was hot. They announced from the speakers that some of the swimmers were lightheaded after their event an indication they were dehydrated. They encouraged everyone to make sure they were drinking plenty of water and a quick check proved they were almost sold out. But parents had plenty of water in coolers spread all over the camp grounds.

Every bit of shade was being used!

Little children, lots in diapers were running around, playing and laughing.

As athletes, they understand healthy eating. Lots of good food spread out over towels and blankets-healthy picnics. One family eating meat and cheese with fruit, another eating spaghetti, hoping for a carb energy boost.

Some who found their voice said, "It's an important priority." He was there even though he had farm work to do.

Others repeated the same reason for being there. The need to support "the grandkids. It's really fun. I enjoy watching the kids, every one of them. I think it's a really good sport. There's a team, but there's individual efforts too. They have kids in every age group. This team is especially great. There is such camaraderie. Lots of fun."

"I don't know." She laughs as she answers the question why she sits in the sun for two days! "I love watching these kids. I'm reliving my youth, wishing I had learned how to swim."

"It's a lifelong memory they make."

"It's really fun to socialize. I love to watch all the kids. I've gotten to know the other kids from other towns. The parents of those kids are good friends now. The kids just love each other. We're family."

"The whole team becomes a family during the summer."

"I don't like coming to the swim meets." Said a little girl age 4. If she could swim in the pool then she would like it.

"I love to watch their improvements, even after one race, not just in skill but in confidence."

"I'm their teacher and I need to support them." She said with some emotion. They all feel the strength of this swim team! They were hot that day, but nothing could distinguish the flames of their team spirit. They wore lightning printed suits and on the back of one young boy a tattoo "fire breather."