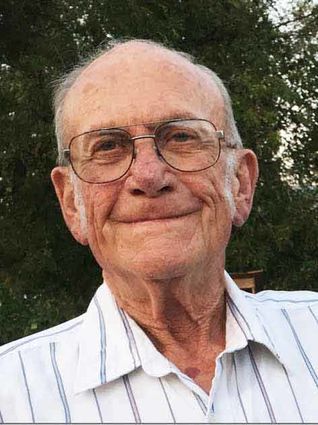 Patrick D. Welty peacefully went Home on August 2, 2018. His loving wife, Wilma, was by his side; daughter, Val, had spent a pleasant afternoon the day before; and all children, Pam, Val, Brian, and Mark, spent several precious days with him the previous week.

Pat was born on March 17, 1934, in Havre, MT, to Ben and Loetta Welty. He graduated from Big Sandy High School in 1952 and went to work for Harvey Keller Sr. at the O'Neal ranch until he joined the US Army in 1953. After Basic training he was stationed at Ft. Hood, TX in the Armd Med Bn and trained to be a cook. (He passed his potato peeling skills on to his children!) After being discharged in 1955, he farmed with his Dad, Ben. In 1960 he and his brother Gene settled into farming and ranching on the family farm east of Big Sandy at the base of the Bears Paw Mountains. Pat retired from the farm in 2006 and he and Wilma moved to town.

Pat was always singing, whistling, or humming. One family pleasure was everyone singing songs on the way home from Mass each Sunday. Pat soloed "Oh Holy Night" at Christmas Eve Mass and sang at local funerals. He was a member of the Holy Name Society and on the building committee for the new church. He belonged to the American Legion Post #50 for over 60 years and was part of the Big Sandy Honor Guard for the Memorial Day parade and other services. He was Loren's spotter for local football games, and he and Wilma enjoyed supporting BSHS sporting events for a lot of years. They were also on a bowling league in Big Sandy.

Other pleasures were: watching his Denver Broncos and Green Bay Packers (or any football game on TV); watching KU Basketball; watching thunderstorms (passing that love on to his children); reading; playing cards; and more recently drinking coffee with the morning crew at the Mint.

He and Wilma wintered in TX for several years, stopping off in KS in-route, traveling between families and enjoying the grandkids. They enjoyed holidays with Val and her family and attended Power sporting events when they could, especially if competing against BSHS.

Pat and Wilma celebrated 60 years of marriage on June 7, 2018, with the "mountain couples" – Duke and Dolly Pursley, Wally and Deanna Genereaux, and Gene and Cora Lee Welty – as they had for many milestone anniversaries. These families spent many winter nights, in younger years, playing cards together. They, and several other families, were summer campers at Beaver Creek, Sheehy Park, and Faber's for many years.

Pat had a fondness for animals. He would hand feed bunnies at the farm and call cows with a rattle of the grain can and "Come Boss". He had several dogs, Joker and Sissy, and even a few cats he was fond of, like Raunchy. In more recent years, he loved spoiling the two Siamese cat sisters, especially his beloved Queenie, who passed away earlier this spring.

He is survived by his brother, Gene (Cora Lee) Welty; sister-in-law, Jackie (Bill) Welty; and many nieces, nephews, great-nieces and great-nephews.

The sacrament of Mass will be celebrated on Friday, August 17, 2018 at 9:00 a.m., at St. Margaret Mary's Catholic Church, in Big Sandy, MT. Burial will be in the Big Sandy Cemetery, with Military Honors, followed by a luncheon at the Parish Hall. The family requests memorial donations to be directed to Big Sandy Medical Center, St. Margaret Mary's Catholic Church, or to the donor's choice. Holland & Bonine Funeral Home has been entrusted with services and arrangements. Please visit Pat's online memorial page and leave a message of condolence for his family at http://www.hollandboine.com.