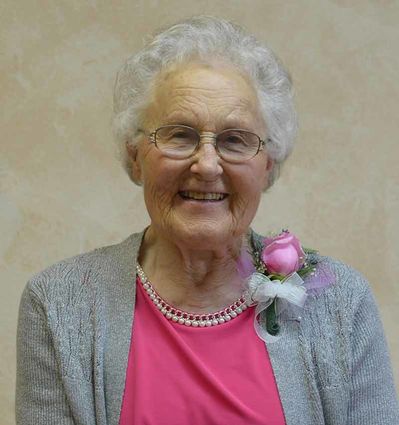 Mary Amelia Novak Bold, 92, passed away peacefully at Peace Hospice in Great Falls on October 16, 2018 from natural causes. A Vigil service was held at St. Margaret Mary's Church in Big Sandy on October 21, 2018 at 7:00 p.m. Her Funeral Mass was celebrated on October 22, 2018 at 11:00 a.m. followed by a luncheon. Interment was held at the Riverside Cemetery in Fort Benton at 3:30 p.m., followed by visiting with family at the Grand Union Hotel in Fort Benton. Memorials can be made in Mary's name to St. Margaret Mary's Catholic Church, Big Sandy Medical Center, Big Sandy FFA Scholarship, or the Big Sandy Historical Society Museum. Holland & Bonine Funeral Home has been entrusted with services and arrangements. Please visit Mary's online memorial page at http://www.hollandbonine.com to leave a message of condolence for her family.

Mary was born on July 19, 1926 in East Helena, Montana, the second of four children born to Frank and Emma (Smith) Novak. During the Great Depression, Mary moved with her family to Rataz, Austria, where her family spent three and a half years. After returning to the United States, Mary was raised just outside of Sun River, Montana. There she and her brother, Frank, raised bum lambs, chickens, and irrigated hay as well as milking the cows on the family farm. In 1945, Mary graduated from Simms High School. The summer following graduation, she attended summer classes at Great Falls College in order to become an elementary teacher, which led to teaching jobs at Salem Rural School and Simms. In May of 1947, her friend, Cecelia Bold, introduced Mary to her brother Albert. Mary fell in love with Albert and the prairie west of Big Sandy, which became her home for the next 70 plus years following their marriage on December 29, 1947.

In addition to raising seven children, she loved raising her large garden. She was extremely generous with its produce, sharing its bounty with her family, her neighbors, her friends, and for many years she donated and peeled all the potatoes for parish dinners at the Catholic Church. She cooked delicious meals for her children, father-in-law (Reinhard Bold), hired men, salesmen and mechanics who came to the farm. Everyone loved her hospitality, and they would often return just before noon hoping for a meal invitation. One of Mary's favorite activities in life was harvest-whether in the garden, grain field, or corral. Mary actively participated in 70 grain harvests, either by providing hot meals and lunches when the children were small, to later driving truck and finally to "the best job on the whole place", a grain cart driver.

In April of 1989, Albert passed away unexpectedly. They had planned to travel during their retirement. Accepting that this was not to be, Mary enjoyed countless bus tours to many corners of the country with her "lady friends". Mary loved area history and was an active participant in the Big Sandy Historical Society. Her deep love of God and her Catholic faith was evidenced by her involvement in St. Margaret Mary's Catholic Church's Altar Society and as a religious education teacher.