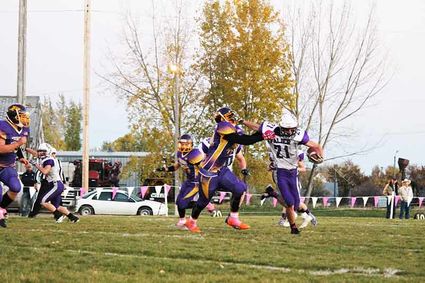 At home vs. White Sulphur Springs Saturday in first round playoff game.

The Big Sandy Pioneers wrapped up the regular season this past Wednesday with a 79-33 shellacking of the Valier Panthers and will now take the No.2 seed in the Northern C Six-man football division into the state playoffs. The Pioneers will be at home to begin the post season and will host the West No. 3 seed White Sulphur Springs Hornets this Saturday at 1:00 p.m.

The Pioneers are having no problem moving the football and racking up points as they have combined to score 168 (84ppg) in their final two home contests of the regular season.

Wednesday in the finale with the Panthers it was sophomore Kade Strutz opening up the scoring with a nine yard scoring run just moments into the contest. Strutz added the conversion and Big Sandy was quickly up 8-0. Valier answered right back closing the gap to 8-6 but with the Pioneer offense moving the ball like they have been it wasn't long before they added another score. This time Strutz ran away from the defense for a 40-yard touchdown giving Big Sandy a 14-6 lead heading into the second quarter.

Strutz added his third score, this one from six yards out, and the conversion to put the Pioneers on top 22-6 moments into the second quarter. The Panthers added a score of their own, to narrow the margin but again the Pioneer offense struck quickly. This time the Pioneers went to the air to score as sophomore quarterback Parker Proulx connected with sophomore Brady Pleninger on a 45 yard scoring strike that extended the Pioneer lead to 30-13 following the conversion run from junior Brock Proulx.

The Panthers were relentless, themselves in their offensive attack and answered right back with another score to trim the Big Sandy lead back to 10, 30-20. As they have done routinely the past few weeks, the offense again was golden. Strutz scampered 63 yards for his fourth score of the day and Brock Proulx closed out the first half with a nine yard TD reception from Parker Proulx to give the Pioneers 44-20 advantage at the break.

The offense kept firing on all cylinders the second half and the execution by the team of the halftime adjustments made by Head Coach Chuck Terry on the defensive side of the ball worked to perfection. The Pioneers limited the Panthers to two scores in the second half, one in the third and one in the fourth,

Strutz scored again in the third quarter on a 41-yard scamper as well as finding paydirt from 20 yards out. Brock Proulx found the end zone late in the third on a 20-yard run. He also opened the fourth quarter with a 20 yard scoring run and provided the final points of the contest an a 43 yard sprint to the end zone putting the finishing touches on a 79-33 Big Sandy win.

The playoffs demand each team play their best football of the year and right now the Pioneers are doing just that, "We're moving the ball really well. (Kade) Strutz is a horse , he's running hard. (Brock) Proulx is opening up huge holes making the rushing attack be as efficient as it is. Parker (Proulx) is throwing the ball well, 100 yards or so a game but with a high percentage," said Head Coach Chuck Terry.

Big Sandy will open with White Sulphur Springs at home this Saturday in a first round Class C Six-man playoff contest, "There a lot like the team we just faced (Valier), I've seen them play in person once and we've been watching film, we'll be ready for them," added Terry.

The defense has been giving up some points the past few weeks but Terry attributes that to injury, "We've missed a couple of our kids, junior Clint Darlington and sophomore Dillon Geyer have sat out the past couple of weeks with some lingering injuries but they will be ready to go Saturday. They are important to our success on defense and we look forward to them contributing this weekend. 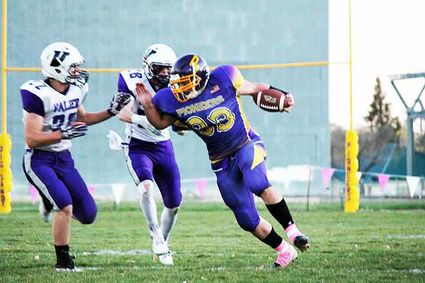