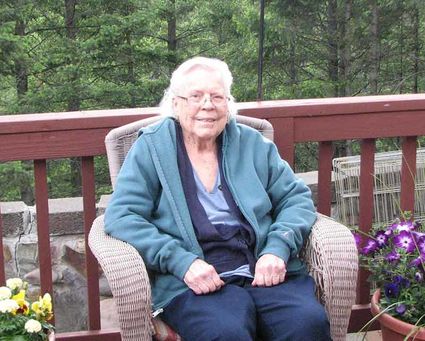 Irene E. Rice, 90, passed away due to natural causes at her Kalispell residence on Tuesday, October 23, 2018. Funeral services will be held at 1:00 p.m. on Friday, November 2, 2018, at Big Sandy United Methodist Church, with viewing beginning at noon. Burial will follow in the Big Sandy Cemetery. Holland & Bonine Funeral Home has been entrusted with services and arrangements. Please visit Irene's online memorial page and leave a message of condolence for her family at http://www.hollandbonine.com.

Irene was born on June 14, 1928, in Ismay, Montana to Harry Delbert and Eva May Shurtliff, who moved to Montana from New York. When Irene was seven years old, the family relocated to Big Sandy on Thanksgiving Day 1935. She attended school in Big Sandy, graduating from Big Sandy High School in 1949. Irene met Walter Alfred Rice, Jr., and the couple married on May 20, 1950. They owned and operated the old Star Texaco Station, which they sold around 1960 to begin farming and ranching. They raised their six children in Big Sandy, and were active members of the community.

Irene's hobbies included gardening, crocheting, crafts, sewing, bowling, fishing and hunting. She was active in the Girl Scouts as a leader from 1949 to 1950. She was a member of the Rebeccas since 1965, having served as Past Grand for five years, and LAPM and LEA for 6 years. She loved to play her clarinet both in school and for fun, and was always filled with faith, encouragement, and wisdom. Her giving nature was evidenced in the way she would always lend a helping hand where she could.

Irene was preceded in death by her husband of 52 years, Walter Alfred Rice, Jr., who died March 5, 2002, and her sister Alice Jensen.

She is survived by her six children, Rocky and Wade (Bambi) Rice, all of Big Sandy, Al Reen (Tim) Jensen of Kalispell, Clay (Melinda) Rice of Scottsboro, Alabama, Will (Danetta) Rice of Ainsworth, Nebraska, and Ben (Kathy) Rice of Big Sandy; 12 grandchildren; 9 great-grandchildren; and sister Shirley Zwemke of Westminster, Colorado.

Irene will be greatly missed by all who knew her, and this world will not be the same without her. Thank you, Mother, for sharing your life with all of us.