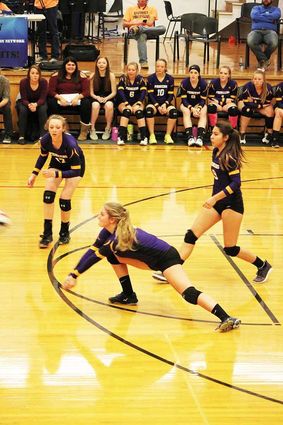 Junior Amanda Cline digs up a ball in the Pioneers opening match Thursday morning at the District 6C-East tournament against the Chester/Joplin-Inverness Hawks. The Pioneers played hard but fell in four sets. They were eliminated from the tournament later in the day with a 3-0 loss to the Box Elder Bears.

The Big Sandy Pioneer volleyball team concluded their season in Gildford this past weekend at the District 6C West Volleyball tournament.

The Pioneers entered the tournament as the No.4 seed and began play Thursday morning against the No. 5 seed Chester/Joplin-Inverness Hawks.

The Hawks took the first two sets of the match rather comfortably defeating the Pioneers 25-17, 25-18 but these girls showed a lot of heart and battled back.

The Pioneers opened up a early lead in set number three and kept things together down the stretch winning 25-23 and cutting the Hawk lead in half 2-1.