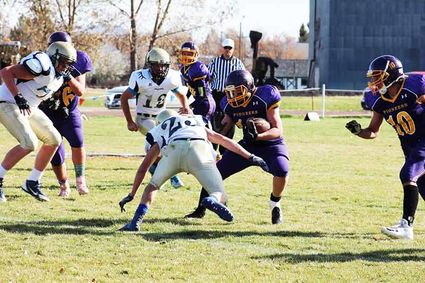 The Big Sandy Pioneer football team concluded their 2018 season this past Saturday with a 46-14 loss to the Wibaux Longhorns in the quarterfinals of the Montana Class C Six-man football playoffs. The Pioneers finish the campaign with a 8-3 overall record. The team accomplished a lot this season under first year head coach Chuck Terry. The team will look to make a return trip to the playoffs once again in 2019 and return many key contributors from this years squad.

Pioneers finish season 8-3, will be loaded again next fall.

The Big Sandy Pioneer football team headed to Wibaux County this past Saturday to take on the top ranked and undefeated Longhorns in a quarterfinal contest of the Montana Class C State football playoffs.

Head Coach Chuck Terry and his team knew they were in for a battle, but one they weren't going to back down from.

The Longhorns have had their way with opponents every time they took the field this fall. The Pioneers let the Longhorns know early on that they weren't like evey other opponent.

In a defensive struggle to begin the gam...