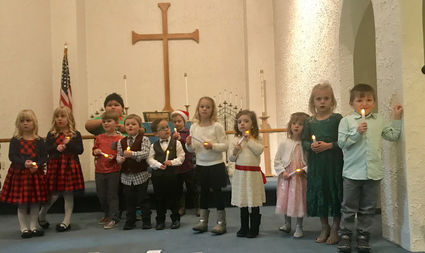 The Christ Lutheran Church had dimmed the lights of the sanctuary and the Christmas tree looked like it had a thousand lights when I entered. Traditional Christmas music was playing quietly in the background. As families walked in with laughter and excitement knowing full well their child was very excited about the program. The lights in the sanctuary went up just so the kids could see their parents and pictures could be taken. The church was full. Full of parents, grandparents, siblings, aunt and uncles, cousins, and guests who came just because a Pre-School children's program is one of the funniest programs to watch. The children are so excited but also scared because it is their first public program.

The program was The Littlest Christmas Tree about three pine trees that all wanted to be beautiful Christmas trees. We know that because the narrator told us the story. Their small voices were so soft even with a microphone most of us couldn't hear their lines. Three different size boys represented the three trees. The first tree, the biggest tree was selected first, chopped down and taken home. Another family came by and picked the next tree, chopped it down and took it home. The last tree was the littlest and no one wanted it for a Christmas tree, but the birds of the air and the rabbits of the forest decorated the tree till it was a beautiful tree. Even the tree felt he was the prettiest Christmas tree in the forest. During the last song, Silent Night and Holy Night, they all held battery operated candles. Some were pretending to blow them out, others where waving them around like they were fireworks making circles of light with them. Others actually took it and aimed it at their parents like it was a lightsaber. One little girl put the candle under her clothes looking at the light. And then she popped it in her mouth. Besides saying all their lines for the play, they sang four songs, said Merry Christmas to their families and then they ran to the fellowship hall for cookies and birthday cake. But, before they could eat cake, they sang Happy Birthday to Jesus.

Santa showed up and after giving everybody a candy cane and wished everyone a Merry Christmas before he left.