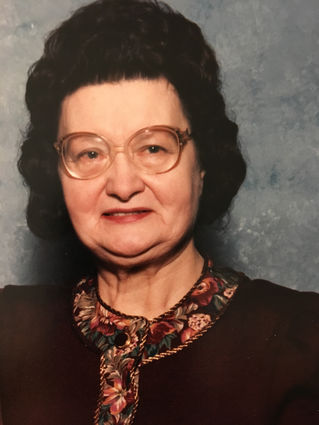 Lillian Rose Petr Blazek passed away on January 7, 2019 in Tumwater, Washington. Lillian was born on March 5, 1922 at her family home in the Iliad community southeast of Big Sandy. She was the second of eight children of Frank Petr and Anna Koutensky Petr.

In 1934 at age 12, Lillian completed Iliad School through eighth grade. She loved both her classwork and her teachers, and was undeterred by the two and a half-mile walk each direction in harsh Montana winters.

In 1936, soon after she had begun high school in Big Sandy, her father passed away. She credited not only her mother but also her sister Helen with sustaining the family during his illness and the difficult years thereafter.

Lillian graduated as valedictorian of the class of 1939 from Big Sandy High School. She enrolled in Northern Montana College in Havre in 1939 in the education program with a state scholarship, and she graduated in 1941 with a teaching certificate.

During her college summers she worked with her younger sister Mary at the Great Falls airport, and after graduation, she worked briefly in Olympia, Washington where her sister Helen had settled.

Lillian was hired in 1941 as the teacher of the one-room school in the Warrick community near Big Sandy. She lived in the teacherage attached to the school. The community embraced her in its active social life.

They gave her a radio, allowing her to give the radio she had just purchased with her earnings to her mother and younger sisters. She was listening to the radio on Sunday morning December 7, 1941 and heard the earliest announcement of the Pearl Harbor invasion. She was overcome with the knowledge of what this would mean for her younger brother Frank, who would be wounded in the D-Day invasion, and for her older students who would soon be of military age.

Lillian went on to teach at the Sheep Coulee community school in 1942-1943, then taught high school in Geraldine, Montana from 1943-1945. One of her extra-curricular responsibilities in Geraldine was to distribute wartime rationing coupons.

On July 7, 1945, Lillian married Edward J. Blazek. In 1951 and 1952, she taught at Edward's boyhood school, Tuscania, near the Blazek farm, giving her first child Elaine, then only three, a very early exposure to first grade.

Lillian enjoyed ornamental gardening, especially of roses, and tree planting. In June of 1961, she worked for two days alongside Edward through constant rain to plant trees including the two spruce trees that now tower over the house and an apple tree which still provides great enjoyment to family and friends in the form of tart, juicy pies like those that she famously made for Thanksgiving and other family celebrations.

In 1988, Lillian and Edward purchased a home on a tree-lined boulevard in Tumwater, Washington. They lovingly entertained and supported the family in that home for many visits and holidays. Edward passed away in 2006, but with Elliot's dedicated care and support in her later years, Lillian remained in the family home until an August 2018 illness.