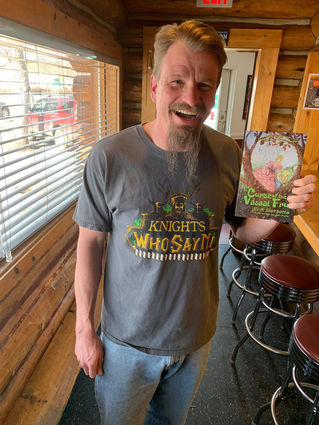 On March 21st Erik Sietsema's had a book signing event at the Roadhouse Diner. Posters were made saying to come and celebrate with a local author Erik Sietsema's "The Curse of the Vassal Fruit". They had a special hamburger creation made especially for the day; "The Curse of the Bacon Sauce". A hamburger made with house-made bacon sauce, red onions, and hickory smoked bacon with fires or salad. Tara Beam and her husband Jason own the Great Falls restaurant.

Tara represented Great Falls and the Roadhouse Diner on Food Network's Guy's Grocery Games on (Triple G) on Food Network back in May of 2017. She competed against three other chefs on an all-burger episode – she won and brought home $12,000. "That was an interesting experience. I didn't know what to expect. I was the only women-the chatty one of the bunch. I did a lot of research and experimenting beforehand."

Talking about "The Curse of the Vassal Fruit" Tara said, "I thought it was awesome. And it really gives a fun ending to get into a second one as well. That's Erik's way. Keeps you in suspense."

"We have hosted other local authors, and when we discovered he was another author we had to invite him. Erik is one of our regular customers. He is very outgoing, very comforting. He's just an all-around good person. We like to come up with specials based on things, for example The Curse. They are going to run the special for one more week.

"He actually filled in and helped us out for a complete day. And I'm telling you it's a good thing he has a job. Erik is a classic person who will jump up and help out." Erik had read on the Roadhouse face book they needed a dishwasher for a day.

"We did a burger challenge and Erik was in it! It is always a pleasure to have him in house."

"He will be doing an interview on KGPR (89.9 FM Public Radio) this Wednesday. We have some good things going for Sir Eric."

Tara went on to say, "He has a new name the "hamburgler-just putting it out there. He was actually caught taking a bite out of his wife's hamburger, so we've renamed him the hamburgler!"

You can follow Erik's writing, plus reading six new chapters of the Flying Pig tales: The Beginning, at Erik's Author Page on Facebook.