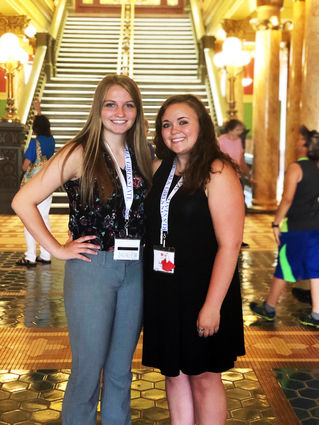 Amanda Cline, daughter of Charla Moffit and Ty Cline, and Lainey Gregory is the daughter of Rob and Leslie Gregory have a greater appreciation for the political process of state government.

Lainey said, "There were over a hundred girls from all round the state and it was really great to make new friends. Getting to know everybody at a deeper level. Learning about our government was a great experience." Going to the capital sitting in the senate chambers and the house of representatives was "cool".

Amanda admitted, "At first, I was very very nervous and I got homesick the first night, but I just had to go through it." She made some good friends from the Northern Division. "The girts just randomly asked us to be in a dance with them. We found some really solid friends. I really enjoyed."

They understand the whole process it better. "It gave me an understanding. It intrigued me, but I don't think it is something I would be interested in doing," Lainey told me. "I did register to vote while I was there." Amanda said she was too young to register yet

They did see their value of being involved and overall the directors got all of them involved in the process of electing public offices and writing bills. Amanda said, "If you are really into debate, politics would be good for you. If you are really passionate about something you should run for the House of Representatives."

They would both like to get better at public speaking. As we got older and as seniors this year they know it's important to value themselves and get involved.

Amanda reflected, "Girls state made me more outgoing, more confident, it was really worth it. It pushed me to go past my comfortable place."

When I asked about they liked the best, they mentioned APR (suicide prevention) training and meeting Governor Bullock. "It was interesting to listen to him talk about things."

This year's Junior's need to apply to go to Girl's State and they would tell them to "Run for positions, if you are a senator you get to go to Washington." Also, "They should write a bill, because of the Samsung Scholarship. "If you write a bill and after the staff look over the bills and maybe choose your bill you could be chosen for scholarship."

It was a great learning experience, built memories and lasting friendships. Both girls wanted to make sure I thank American Legion Auxiliary.