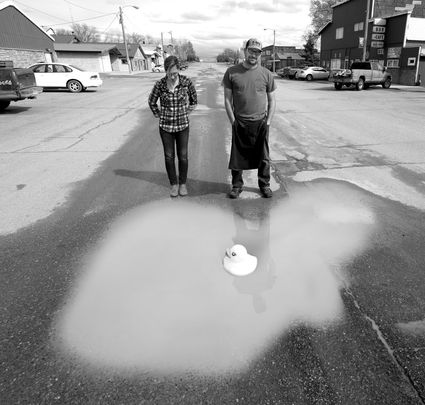 Josh Danreuther and Charlotte Broekhuysen Stanberry stand in front of the big puddle in front of Pep's.

Cities and towns across America lay claim to landmarks as signatures of their identity. Most anywhere you travel, large or small, has a few. New York City has the Empire State Building (among others). San Francisco has the glorious Golden Gate (and Haight-Asbury). Seattle has the Space Needle. Flint, Michigan, has poisoned drinking water. You get the idea.

Through its history Big Sandy has had its share of landmarks. For decades the town was watched over by the famous water tower (long gone now, its legs cut out from under it in 1993). There was the iconic Montana Hotel on Main Stre...