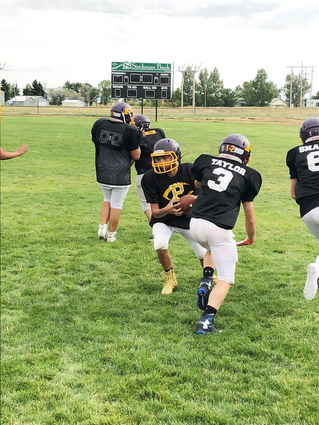 Big Sandy junior high football players may dream of the day they suit up under the lights for the varsity but their 2019 schedule might make their senior counterparts jealous.

The younger Pioneers host nearby rivals Box Elder and Highwood amidst a five-game homestand to begin this season. Meanwhile, the senior high team buses as far as Grenora, North Dakota, for a September contest and will not face any Golden Triangle foes until the playoffs, if at all.

"I'm sure these guys will be pretty excited to play Box Elder," coach Tuckaer Taylor said, as the Bears who have played 8-man football in recent years transition back to the 6-man game.

Taylor, a product of a well-pedigreed 11-man program in Belgrade, where he played outside linebacker and wide receiver for back-to-back state playoff Panther teams, came to enjoy 6-man football as a coach and teacher in Sheridan.

"People will say it's not real football," he said. "It's football. It's fun. It might be more like backyard football but it's still football."

The Pioneers' junior high squad will prepare for a bright future running the majority of the offense the varsity employs.

"There's a few more formations that we run with the varsity," Taylor said. "We will be more out of the basic I-formation and we are using some of the spread run-pass option with (junior high), too."

Being leaders this year Taylor hopes will help prepare his eight graders to contribute early to success at the senior high level.

"(Quarterback) Wylee Snapp and (running back) Cooper Taylor (no relation to his coach) will be ready for high school. They are skilled enough and fast enough," he said. "Cooper needs to add size ... but they are our more vocal leaders. Lane Demontiney is a more quiet leader but he's positive. Younger kids look up to him and to Jake Darlington on the line."

"We have more depth on the line," Taylor said, adding his skill players will be building valuable experience this season.

The team kicks off its season at 4 p.m. Friday at home against Jordan. Key dates this season include visits Tuesday, Sept. 10, from Box Elder and Monday, Sept. 23, from Highwood.