Pioneers Prevail over the Jordan Mustangs 44-28 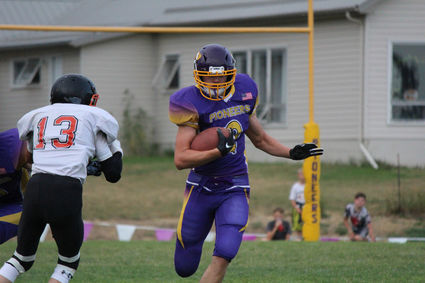 The number one Jordan Mustangs came to town to face the number two Big Sandy Pioneers. The anticipation was building all week. You could see the look of determination on the faces of the Pioneers as they walked out with Pioneer flags, with the song Knock Out blaring on the brand-new speakers the Booster Club purchased. The speakers added to the enjoyment of the warm-up and the game since you could hear so much better.

The Jordan Mustangs won the coin toss and deferred to the Pioneers who got the ball first. After the kickoff on the first drive of the game, the Pioneers score first with a Kade Strutz run up the middle. Extra point, also kicked by Strutz, was good. After a couple of sacks and good tackles from the Pioneers, the Mustangs still manage to get the ball up the field and score. The score is now 8-6 with the Pioneers on top.

There was a hard-fought battle between both teams in the second quarter. Defensive plays from both sides with hard blocks from Brady Pleninger, Clint Darlington and Brock Proulx, the Pioneers fought hard and ended up going into the locker room at halftime up a 20-12 lead.

Kade Strutz said, "Everyone did their job for the most part-we weren't perfect, and we still have room to improve as a team. It's going to be a great season!"

And from a member of the crowd, comes this quote. "Wow, great game! The challenge will be to stay humble and hungry!"

The Pioneers agree themselves as quotes from the brothers three testify. Parker Proulx said, "Jordan is a really good team, and there is a chance we will see them again, but for now we are focused on North Star. We have to take this season one game at a time." Brock Prouix wrote, "I know this team has the ability to do great things as long as we stay focused and don't let our own success hinder our ability to progress." And Ryan Roth said, "If we keep playing hard and keep our heads, I know we can have success down the road."

The next Pioneer game will be against the Northstar Knights on September 6th at 7 pm.