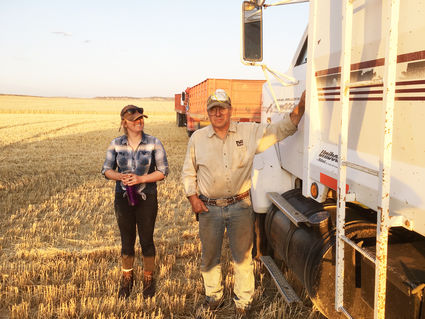 Emily Sparkes stands in the field during harvest with Jim Drga.

Jim and Marla Drga opened their home to Emily Sparkes, an agriculture guest from England for two and a half weeks. She said, "I thought I should just come over and just see a different scale of farming then we have in England." Emily is a dairy farmer in England. "It's totally different here. She lives in a village called Pretty, with rolling hills and lots of rain.

"I wanted to see a different way of doing stuff. It's a lot bigger over here. You need a lot bigger landmass to produces crops and animals. We have smaller farms because we have a lot of rain. Like here, it's still stressful." Montana has around 28,000 farms and ranches that spread across 59.7 million acres. They are larger averaging 2,134 acres each. Emily and her parents own a family dairy farm where they run Friesian. They are smaller than the Holsteins you have here." Friesians are used for both milk production and for meat in England. The average size of a dairy herd in England is 151 Friesians.

What most impressed her was the size of the farm. "It is so big and the views. You can see for miles." When Emily first came to Montana, she went to 4-H Congress in Bozeman for a week and then to Plevna where Emily stayed for two and a half weeks working on a cattle ranch before she came to Big Sandy.

She mentioned except for the size of the operations farming here is like home. It's family farms, where they care about their livestock and the land. "I'll get back to work. I'll milk some cows," when she gets home. "Dairy is hard work. You have to be there every day. My parents are working very hard so I could come over here." They do have horses to help subsidize the farm income. Although they mainly sell to local milk companies, France does sell a lot of meat and milk to England.

She was shown pictures of the last to winters. "Winter was amazing here." She doesn't have winters like that. "Last winter we had two feet of snow on Friday, and it rained on Monday. We don't have winters as you do."