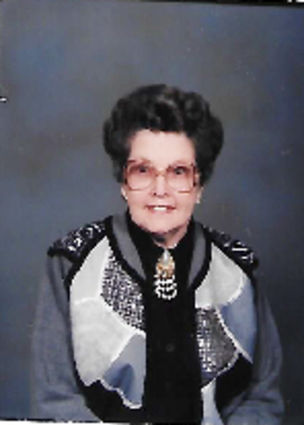 Irene Nelson/Freier passed away peacefully on October 7, 2019 in Helena, Montana where she had lived for the past 10 years.

Irene was born in Waubun, Mn. and shortly thereafter moved with her family to Flaxton, ND where she grew up and attended school. Irene met Lewis Nelson in school and they ultimately married and began their life together working in a combination of farming and grain elevator operations in North Dakota and finally Big Sandy, Montana. Lewis managed the Farmers Union elevator(s) for many years and Irene worked in the local grocery and drug stores. Their three children were Nondice (Nondy), LaVern (Vern) and Jerome (Jerry) all of whom grew up in Big Sandy and were graduates of Big Sandy High School. Both Irene and Lewis were active in the Big Sandy chapters of the Eastern Star and the Masons for many years.

Lewis passed in 1963 and Irene remarried in 1966 to Adolph Freier, the Postmaster from nearby Box Elder. They made their home in Box Elder for many years together enjoying horses, country music , dancing and travel. Irene loved horses and was an expert at getting her Tennessee Walker steeds to do about whatever she asked of them and had many trophies and awards to show for her efforts.

After Adolph passed, Irene ultimately moved to Helena, MT to senior living facilities to spend her final years. She is survived by her two sons (Vern of Castle Rock, CO and Jerry of Helena, MT; daughter Nondy passed in 2016) and many grandchildren and great grandchildren.