Dale and Micki Morey held together by love and faith 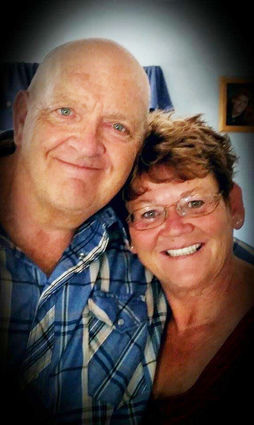 I said, "Let's start at the beginning. When did you get married?" They both looked at each other, smiled, and Micki said, "June 9, 1973. He keeps track of that better than I do." They have been married for 47 years.

Micki's father moved to Opheim, Montana, when she was a senior. Her dad was the Superintendent of Schools. She came late to school that year because she was working at a dude ranch. I asked Dale did he notice her when she got there, and he laughed, raising his eyebrows. He said, "OH! How are you doing?!" Micki said, "I think he liked me a lot!" Dale responded, looking at me, "Your recording!" and then they both laughed.

He was leaving immediately after graduation to work on a harvest crew, and she had a friend, a male friend from Wyoming, who came to her graduation. That senior graduation night, "I didn't go out and here comes this guy, he didn't even knock..." Dale interrupted, "what do you mean I didn't knock." Micki responded, "Well, maybe you knock, but you came right in asking for my address for the summer. After that, my mom called him John Wayne. He was her John Wayne."

After working that summer, he was almost drafted. Waiting for him, after he had returned home, was "three to four letters from the army saying you need to get your butt in here." But his boss wanted him back. He left, but "when I got back in November, the Army was getting serious, so he went into the Navy. The good Lord had a plan for me. I got in the Navy, and it was pretty good."

"When I was joining the Navy, I was touched by an angel. I was really stressed out, and there was this guy there

who really calmed me down. He touched my shoulder and talked to me. It really helped. When I turned to thank him, he wasn't there." Dale teared up and cleared his throat while speaking. The memory of that moment was still powerful for him.

According to Micki, "We lost contact for quite a while. In four years, I saw him twice. I was living in Shelby, and things weren't going that well, and my mommy says, why don't you call John Wayne. So, I wrote a letter to him, and it went to Opheim, and his mom forwards it to him in Sicily. We started writing to each other back and forth. I was going to join the military, and he said, 'why don't you join mine. We'll tour Europe, and you can live here with me'. Well, things were tough for me, and I knew he was a man of God! He came to visit me in February to check me out. The next time I saw him was the day before our wedding."

It cost him a total of $67 to travel from Sicily to Opheim, Montana, to "check her out." He told me how it must have been God, because it all went so well, so connected. He traveled using military hops.

After they got married, they did tour Europe. They stopped in England and rented a motorcycle. "At a high-class motel, everyone was looking at us, and we couldn't figure out why are they looking? We were so in love; we didn't see how black our faces were even when we looked right at each other." They both laughed, remembering. They traveled to Finland, Germany, and the leaning tower of Pisa, Rome, and Sicily. "Kind of a straight shot, I was running out of leave."

Micki said, "We stop at the leaning tower of Pisa....and had a pizza." Laughter again. "Our lives have been good. There are days we don't like each other." And then they laughed.

We visited about how they seem to laugh a lot. Dale said, "I tend to go overboard. We need to cut back to just teasing on Tuesday and Thursday. We surprise ourselves all the time. We went to the Cho-Cho train and guess what she did? She dressed the part". They both laughed, remembering the day.

Micki looks for ways to spice up their lives. She likes to surprise Dale with funny moments. In March in Las Vegas, during breakfast, Micki asked everyone to sing happy birthday to Dale. The entire restaurant gave him a happy birthday breakfast. Then when they went to the NASCAR races, she even got everyone in the stands to sing it again. Once when celebrating their anniversary at MA's Café in Loma, she came out of the bathroom with a wedding veil and holding flowers singing, "I love you truly." She surprised them all!

The real story behind her winning the Christmas Stroll costume party as Aunt Bethany was Dale bet her she wouldn't do it. He lost and was required to complete his bet, which was to make a snow angel in his underwear.

They loved retelling these stories, both of them looking at each other and laughing. She sighs, "He's a good man."

Ten years ago, was the start of his first battle with cancer. He has battled cancer four times. Those were struggling days for him. Dale said, "Four years ago, a nurse came into my room to sing the 23 Palms, preparing me for death." Micki added, "That's how serious he was. They asked him 20 questions he knew the answer to two. When they asked him, 'Who was the woman standing in the room?' He said, 'Snarky!'" That's her nickname.

They moved here seven years ago, which they believe was God taking care of them again. They have three children Keri, Mindy, and Dalelynn. They have five grandchildren and a grand-dog.

Just recently, they gave me another example of God being with them. Micki said God is with them "all the time...The reason I married him". They were traveling to Great Falls to watch their grandchildren wrestle when they found themselves in the sand storm, which closed the highway two weeks ago. "We were stop with cars on both sides. We were like from here to the refrigerator when a semi plowed through and hit the car in front of us." They were in her Volkswagen, and know if the semi had hit them, they would have both been dead.

Keri had briefly come into the house, and I asked her about her parents, "They are wonderful, and they are family-oriented." When I asked her what something she had learned from her parents, she said, "Forgiveness. And how to Love"!

Micki tried to explain to me the importance of the community of Big Sandy to them. How important everyone here is to their relationship. "Where you live is how you live. It just makes your life worth-while." The community is a part of their lives and makes it fuller. "That's what keeps us going."

Micki said, "He has a wonderful sense of humor, and you need that." I replied, "you do too." "Because I am happy with life," Micki replied," and if you want this to be a Valentine, it is because he made it possible. Otherwise, I don't know what I would be doing".