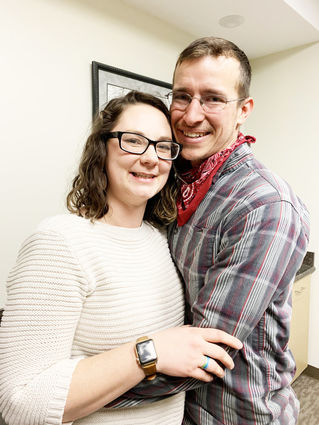 Charlie and Stephanie Overbay met at Rexburg, Idaho, in college. Stephanie chased him, primarily because he was just a happy man, always trying to help others, and he was shyer than she was. They were married on Dec 18, 2010, and had a Christmas honeymoon at Salt Lake City. Charlie and Stephanie have three children David, Kirren, and Elliot.

In April 2014, they moved to Big Sandy from Rexburg, but not before they moved a few times before. Charlie had taken an intern position at Disney World Epcot Center at the horticulture department, Living with the Land Pavilion/Behind the Seeds Tour. He was responsible for starting all the plants by growing them in three different ways.

The Epcot Center has four greenhouses and a fish farm. Working there, he fueled his passion for growing plants, so when the opportunity came for him to grow vegetables in Big Sandy, he jumped in with great excitement. He leases 24 acres and currently uses only 12 acres, looking to expand the garden in the future. But he feels his efforts, all by hand efforts, have paid off. He still loves growing vegetables. He likes the growing of it, the difficulty of it, the challenge of it. His children even try every vegetable.

Stephanie believes what is important to him needs to be supported by her. "We are going to do this for the long run."

When I asked what was important in their marriage, Stephanie said, "forgiveness. Forgiveness needs to happen quickly; it is what is most important."

Charlie said, "when we were going to get married, I told Stephanie I would always love you, serve you, and forgive you. If I continue to do those things, those will keep my focus on her."

Stephanie continued, "The whole time we were dating, his brother had just divorced. We talked about that and how that would never be an option for us. We were going to work through stuff. And it's been good. Because it gives us a perspective of what is important to us."

I mentioned that Charlie never stops smiling. They both laughed, and Stephanie said, "That's true." Charlie said he is happy every day, well almost, "90% of the time". Stephanie said, "when he comes home, he says, welcome home. The kids love it."

Inside they like to watch movies as a family. Outside they love hiking, fishing, and camping.

They both do have two jobs each, but still makes time for each other. They feel they must take time to talk and listen to each other. Everybody needs a sounding board to help relieve the pressures. He mentioned he needs to support what is important to her. Currently, she has accepted the 365-day challenge. That's a challenge to walk, run, bike at least one mile every day for 365 days in a row. Right now, she is on 211 days.