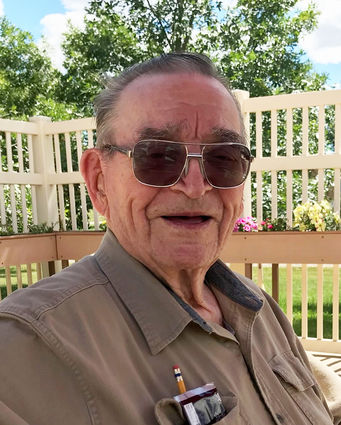 Raymond Edward King, 90, passed away peacefully at the Big Sandy Nursing Home on February 13, 2020 after a long battle with Alzheimer's Disease. His Memorial Service will be held at the Benton Funeral Home at 11:00 a.m., Monday, March 9, 2020. Memorial donations in Ray's name may be made to the Big Sandy Medical Center or the Alzheimer's Foundation. Benton Funeral Home has been entrusted with services and arrangements. Please visit Ray's online memorial page at http://www.bentonfh.com to leave a message of condolence for his family.

Ray was born in Fort Benton, MT on February 27, 1929 to L. Earl King and Kade B. King. He spent his childhood on the family farm southeast of Big Sandy. He married Lillian Littlefield on January 1, 1950. They had three children; LaRae, Nyla, and Raymond "Jake". The couple later divorced.

Ray worked for various farmers in the Big Sandy area and later got into the grain elevator business. He operated elevators in Loma, Moore, and finally Lewistown, where he retired.

He was preceded in death by his parents, Earl and Kade; his brother, Kenneth King; and daughter, LaRae.