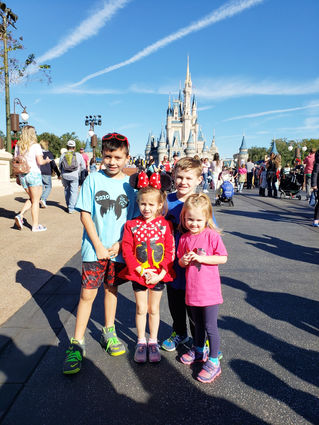 On Christmas morning, Travis and Darlene Cline excitedly awaited their children Gabe and Brookelyn's responses, as they opened their gift containing tickets to Walt Disney World! Sadly, they would never get the response they were seeking that day. The children looked confused, then Brookelyn asked, "What is Walt Disney World?" Darlene went on to tell her kids about the vast amusement park and how they would require flying to get there. Unfortunately, the mega gift was overshadowed that day by the other physical gifts received, but the memory of the Park will remain with them forever!

As we here in Big Sandy experienced our general wintery weather at the beginning of January, complete with snow and sleet, the Cline family headed out to Florida for a quick getaway with Darlene's family. Darlene's parents, John and Renae Ostle, kindly gifted their daughter and son, as well as their families, with a trip to the sunshine state. They were fortunate to experience nice weather in the high 60s and 70s.

The party of 10 were ecstatic to enter the parks on their first day! It would be the first visit for every single member of the family! The Most Magical Place on Earth, as it commonly referred to, did not disappoint. "It was pretty cool," exclaimed Darlene. Her 5-year-old daughter, Brookelyn, was taken back by getting to meet some of her favorite characters from popular Disney movies and shows, especially the Princesses! Darlene and her 8-year-old son, Gabe, were equally impressed with the interactive shows available. "Gabe and I went twice to a 4D Mickey movie that made you feel like you were right there!" relayed Darlene. The movie was an interactive spectacle that engages not only your sense of sight but your sense of touch! "There was a part where you saw bottles of champagne popping, and you could see, hear, and feel the spritzing!" continued Darlene. Because the group was only in Florida for three days, they only got to see a very small portion of the famed parks. "I would like to go again!" commented Darlene. Both Travis and Darlene were especially surprised by the attractions and amenities appealing to adults. The couple had fun sampling foods and drinks from around the globe in Epcot, as well as channeling their inner kid on The Twilight Zone Tower of Terror ride. This ride is the second tallest attraction at the entire resort and is simulated to feel like an experience on the popular television series, the Twilight Zone. The ride is an elevator lift with big and sudden drops along with eerie sound effects! Another big highlight for the group was the new Star Wars land in Hollywood Studios. Although only one person in the entire group had previously seen the Star Wars movies, everyone shared in the excitement of the realness of the ships and the buildings on display. "My dad loved it!" said Darlene, "...and Travis went home and started watching the Star Wars movies from the very beginning." she continued.

The two days spent in Walt Disney World raced by. However, no trip to Florida would be quite complete without a trip to the beach! The family basked in the sun as the kids took in the sight of the ocean. The cousins merrily played in the sand, getting fully covered from head to toe!

Earlier that day, the family visited the Kennedy Space Center, which ended up being their most favorite part! The complex in Cape Canaveral houses an interactive museum, attractions that allow you to simulate astronaut experiences, opportunities to meet real astronauts, as well as other pivotal directors from NASA and at particular times during the year hold actual rocket launches! Filled with educational exhibits, the center allows you to learn about the history of NASA and the ins and outs of space travel. Just as the interactive entertainment at Disney World had struck a chord with Darlene and Gabe, the rest of the group loved the idea of climbing aboard a shuttle and simulating a launch experience! "You can see the control room, suddenly the windows start shaking, and you're like right there; it was so cool" described Darlene.

Upon her return, I got a chance to ask Brookelyn what she thought of Walt Disney World. Far from her initial response on Christmas morning, her eyes grew wide, she smiled sweetly and said, "I liked it" as she ran by with friends. No doubt, it will be an experience the children will never forget, but surprisingly the adults had an equally fun experience!