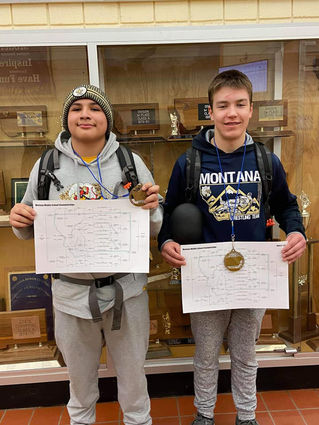 According to Kyle Rodewald, "the Pioneer Wrestling season has been nothing but success.

Beginning in November, I took six kids to Conrad for team duals. When we started our official Little Guy season, we returned 13 of 16 wrestlers from last year. Also, we gained another 17 wrestlers this year from age 3-12. We consistently had 30 wrestlers on the roster all season. To date, we have wrestled in 15 different meets/tournaments. After our regular season with the State Little Guy Tournament, our team combined had wrestled in over 450 matches. With some of our more experienced members by year-end will have wrestled in nearly 50 matches for the year. This year we took 22 wrestlers to the State Tournament. A first for our program. Twelve wrestlers placed at the State Tournament. Another first for our program. We also recorded our first team award with a 3rd Place at the State Tournament in Middle Division."

Kyle said, "I foresee nothing but continued growth in our program and our kids. We have good parents that have shown nothing but support for our incredible program. We have great kids that love to work hard and love to make themselves better. Both make coaching easy, and both make this program grow and succeed."

Varsity Pioneer Wrestling coach, Tucker Taylor expressed enthusiasm for this year's high school and Jr High wrestling programs. "Bailey had a good season, and he is here working with the little kids, and he is only going to get better."

The state Jr High meet was In Lewistown. "Bold won 135-pound class at state. Darrell Sunchild won the 189. They had a great week. Dominated all the way through." Two weekends ago they went to a meet in Shelby and "had some good competition. They both had a loss. I want good competition. I want them to have a loss because I believe they learn more from a loss. After all, it grounds you and lets you know what you have to do better. If you are always winning, it's tough to learn from it. You don't let it beat you up."

Tucker continued, "Kyle is doing a great job with the little guys' program. He's building a feeder program, and it's going to help us get numbers in the middle and high school if we can get these kids to stay interested in wrestling. There are a lot of really good kids wrestling now. If we can get some more high school kids interested, there are some kids not participating in Basketball." He would like them to try wrestling.

Tucker said, "What I am trying to do now is improve the wrestling facility at the high school, which would be huge. The mats are three to four decades old. It's time for me to get the ball rolling on getting a mat for the high school." The mats can run up to $12, 0000. So, he knows he needs to do some fund-raising. "We can show the kids they don't have to have crappy mats. What they have here at the little kids' mat is far better than what we have."

They will also need to purchase some new singlets. "Women need a different singlet then the boys."

"We have a great base. Now is the time to build the wrestling program. One of the reasons I'm in Big Sandy is to build a program. It's personal for me. My dad built a program in Belgrade, and I want to build one here."

"To be honest, being a teacher, yes, it is essential, but it's important to be a part of a team. Classes are important, but he believes it is important to participate in school-sponsored teams. "It is huge. That is how you learn your leadership skills. That's how you learn your teamwork skills. It's where they can learn to be healthy. They have to take a BMI test to determine how much they can healthily loose. I think wrestling helps with so many skills you need."