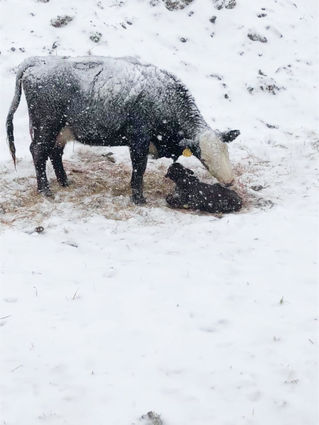 It seems a little ridiculous to be writing an article that celebrates who we are. We know we make the food the nation eats. We know the facts, but it doesn't hurt to remind us about how important we are. I located the following facts from the American Farm Bureau Federation: 2 million farms dot America's rural landscape. About 98% of U.S. farms are operated by families – individuals, family partnerships, or family corporations. One U.S. farm feeds 166 people annually in the U.S. and abroad. The global population is expected to increase by 2.2 billion by 2050, which means the world's farmers will have to grow about 70% more food than what is now produced. Farming accounts for about 1% of the U.S. gross domestic product.

The United States sells more food and fiber to world markets than we import, creating a positive agricultural trade balance. 25% of all farmers are beginning farmers (in business less than ten years); their average age is 46. Americans throw away an estimated 25% of the food they bring home every month. Farm and ranch families comprise less than 2% of the U.S. population. A whopping 40% of all food grown and produced in the U.S. is never eaten.

We know these things, but it was rewarding to see the nation is starting to understand where their food comes from, besides the grocery store. During this tough time, there is one bright spot. The federal government has recognized how valuable we are to the nation. We have been labeled as a critical industry during the coronavirus outbreak.

While I was researching for the wording of the federal declaration, I found the following statements. According to an article published by the Agri-Pulse, "The National Council of Farmer Cooperatives President and CEO Chuck Conner, "The Trump Administration should especially be commended to recognize the importance of the entire supply chain - from input provides to farmers and ranchers to food processors to retailers," he said in a statement. "Leaving one link in this chain out of this designation would have made the task facing American agriculture all that much harder."

"Yesterday, more than 40 farm groups sent a letter to President Donald Trump asking that the administration "be mindful of the food, feed, and agricultural supply chain and workforce impacts on the ability of U.S. agriculture to meet the needs of consumers." The Department of Transportation's Federal Motor Carrier Safety Administration has already lifted hours of service restrictions for livestock transport."

"National Pork Producers Council President Howard "A.V." Roth welcomed the guidance; NPPC was among many groups pushing for the official designation this week. "We recognize that states and local governments are working hard to ensure operational continuity," he said. "As part of that effort, we urge state and local governments to swiftly follow and implement this federal directive. We need to ensure there is a continuous and uninterrupted supply of pork to America's kitchen tables."

"The Fertilizer Institute also welcomed the move after sounding the alarm yesterday about the important timing of the designation. In a letter to congressional leaders and the Trump administration, TFI President and CEO Corey Rosenbusch noted the upcoming planting season. They said the "timely delivery of plant nutrients to American farmers is critical to their ability to produce food, fuel, and fiber."

"The ag industry is facing a long list of unforeseen complications as the virus hits thousands of people across the country. Farm groups are concerned about labor issues should critical workers become infected and are also worried about the approval process for H-2A workers seeking to come to the U.S. to work during the upcoming planting season."

"So far, agribusiness interests say they're operating as usual. The Food and Drug Administration has suspended some of its inspection activities, but USDA's Food Safety and Inspection Service has not, and USDA leaders have said they will "continue to ensure that grading and inspection personnel are available." Meatpacking plants cannot operate without a USDA inspector.

DHS notes the designation is advisory in nature and "is not, nor should it be considered to be, a federal directive or standard in and of itself."