Larry and Ann Bitz Neighbors We Care About 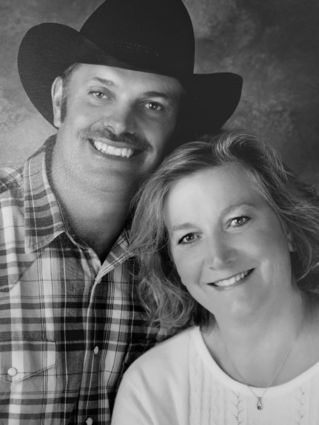 Editor's note: OK, so during these times, there isn't much news, but it is also true that during these times when we need to pull together as a community. Get to know one another better, reach out and celebrate who we are. Find ways to support each other. With that regard, I decided to run a series of articles to do just that.

We started the interview over FaceTime. A first for me as I needed to take notes instead of recording the conversation. Larry said I had to excuse him because he had homemade bread in the toaster. "And, nothing is better than toast made with homemade toast."

Ann Bitz was born and raised in the Iliad area south of Big Sandy. Larry moved to Big Sandy during his sophomore year. Ann says, "He was Mr. Athlete, and I was Miss Speech Team. We had nothing in common."

After graduation, Larry went to Warner Pacific College in Portland to become a Pastor. He stayed for one quarter. "It was a hard choice, one of the top two of my life. I spent countless hours in prayer." He decided to go to Montana State University to study Ag Business.

While in Bozeman, Larry caught a ride home with Ann one weekend. She was going home to help with branding and invited Larry to come and help. Ann had a jock shock when Larry came out to branding, and he could ride a horse! Larry called and asked Ann if she would like to go to a movie. Ann's mother came out and said, "Larry Bitz called you!" There was excitement and shock in her voice and laughed, remember her mother. Ann said she was impressed that Larry came out to the house to pick her up. No one had done that before. Larry said, "I traveled 220 miles that night to take her to the movie."

Ann had gone to MSU to get a degree in Home Economics, hoping to get a job as an Extension Agent. When she graduated, there were no Extension Jobs, so she took a job as a Home Ec. Teacher in Big Timber. They had built a new Home Ec room in Big Timber with five new cooking stations.

After graduating, he took a job at the Chester/Tiber Cargill Elevator. And Ann taught school at Big Timber for a year before they were married. They decided to stay in Big Timber because Ann wanted to earn ten-year. Larry said the fine dust at the elevator was killing him. They didn't wear masks back then, and he would go home and cough continually. Besides, there were a lot of outdoor activities in the Big Timber area. For a year, he took odd jobs before he started working for the Farm Bureau Insurance agency selling insurance for six years.

At that time, Ann's mom was sick with cancer, and her dad was getting older. Ann was pregnant, so they decided to move to the farm.

They ordered their house from Majestic Homes. It was built in seven days and was empty for 12 days before they moved in.

Larry and Ann were both going to do the 1989 Cattle Drive, but Rebecca had just been born, and Ann decided to stay home.

They've lived an incredible life on the farm with family always close by. Holidays are always celebrated with family even though Ann's gramma died at Thanksgiving, and her mother passed away at Christmas time. Larry said the emphasis at Easter and Christmas is not family. It's Jesus.

Ann and Larry have two children, Rebecca and Daniel. Both children were home-schooled, went to college, a graduated with degrees. Rebecca has a degree with a MS in Social Work from Warner Pacific. Daniel has a BS in Electrical engineering. Larry and Ann are grand-parents to one, but there is a second coming shortly.

Everywhere Ann looks, it reminds her of memories, as this is her home as a child. She has the same garden place her mother had, the sun comes up at the same place it did for her mother and father and then again for her. They farm the land her great grandfather farmed.

Both of her great grandparents originally came from Czechoslovakia. In 1913 Frank Drga and 35 other people got tickets on an emigrant car and headed for Big Sandy. On his arrival, he purchased a wagon and a load of lumber and set out to stake his claim. He built his first house 22 miles southeast of Big Sandy near Hay Stack Butte. Ann and Larry still farm that homestead.

Vincent and Anna Lanik homesteaded in area in 1913. He was a tailor by trade but finally had the opportunity to own his own land. He originally came to the United states to avoid serving the Kaiser at the Italian front in 1908.

Larry and Ann haven't stressed that much, nor as their lives changed that much due to the COVID-19 virus. Larry did say he was in Walmart the day before, and it was "crazy." The biggest thing they miss is not going to church.

What is the secret of their marriage? There is no secret. You make a commitment, and you stick with it. When we got married, we became one, with Christ being the unifying factor, a cord of three strands is not easily broken. We made those vows before God, and for us, that is something you don't break. It's that simple, and there is no secret. It takes work, lots of prayers, and turning things over to God."

I always ask at the end of these community spotlights for a person or persons they have a lot of respect for. They mentioned four people; Michelle Danreuther, Tom Sheehy, and Pam and Arnie Gasvoda.