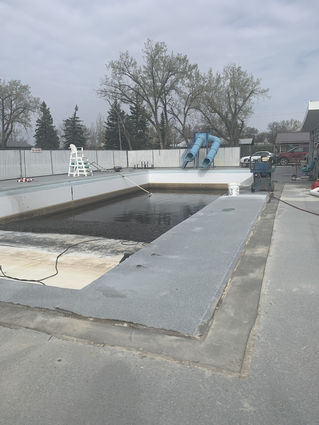 Last Thursday at the Big Sandy City Council meeting, they learned Big Sandy had won the Montana State Park and Recreation grant for a Walking Trail (sidewalk). The Walking Trail would start at the F.E. Miley and connect the school with the sidewalks already along Johanson street, the main street downtown. It was funded at $50,500, which was $10,000 short of the requested amount. However, Rotary has already met and is willing to pay for the rest of the money. The total project was bid at $76,000. The city will be getting its official notice about the funding in July.

There was no Sheriff's Report.

The city also had the results of the soil samples at the lagoon runoff and has determined they will need to do some fertilizing on the field.

Kadrmas, Lee & Jackson, Inc., KLJ, was also present by phone and reported on the current North Central Water pipeline project. The line north of Shelby will be done by June. However, there are still trying to get easements in the Rocky Boy reservations. COVID-19 and the closure of the reservations have made it challenging to get easements. They have altered the route the pipeline will take.

KL&J has completed the preliminary engineering report (PER) for the stormwater system. The city council voted to approve the PER making the next step application of grants.

Bear Paw Development was also present by conference phone, and they will continue to apply for grants and look for other sources of funding for the city. They expressed concern that because of COVID-19, the town has not had a public meeting concerning planning, but realized the meeting had been planned but then canceled.

The city council is still working on some wording for the public hearing concerning the water/sewer ordinance. As soon as it is recommended to have a public hearing, they will have one so there can be a discussion on the new ordinance and rate system for the sewer.

Rich Jesperson has been working on getting the speed signs working again.

Mayor Shaud Swarzbach said the city pool will be ready by June and hopes that phase 2 of the reopening of businesses will happen at that time for the kids to go to the pool this summer. It was noted that lifeguards would be hired in May as well.