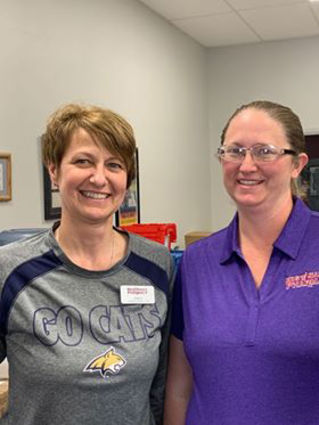 Editor's note: During the Summer months of 2020, the Mountaineer will support the businesses that support the paper by writing a weekly Business Profile. We acknowledge the interdependence we have with small businesses. During COVID-19, it has become obvious how important our communities are, and with that, make this effort to support each other.

Danielle Weaver moved to Big Sandy in June 2016. She is originally from Great Falls but went to Wingate North Carolina School of Pharmacy. Danielle is married to Daniel Weaver of Big Sandy. Their daughter's name is Ellie. Their second one, due June 28th, is supposed to be a girl as well.

Danielle has noticed changes in Pharmacy just in the last four years. Pharmacists are more recognized as a provider, not only a pill dispenser. Pharmacists can determine when medications clash, or when there when one drug is doing the same as another. It's an essential part of one's overall health.

She likes working and living in Big Sandy. "It's a small town, and you get to know everybody."

Cindy DesRosier is married to David. They have two children Nicole and Danny and two grandchildren. Cindy works two days a week.

Chris Halko grew up on a ranch in Centerville, Montana. When he was a senior in high school, he went to a career fair at the college of Great Falls, where he met a retired pharmacy who loved his job and encouraged Chris to pursue it as a career. It was only a few years ago that Chris learned he had a distant uncle that was a pharmacist.

One day after Chris's 23rd birthday in 1995, he came to Fort Benton to work at the Fort Benton Pharmacy. He and his wife Terri purchased the Pharmacy in 2006. They have one daughter Ranie who is 15 years old.

But the most significant difference and the challenge is the involvement of the insurance companies and the PBM (Pharmacy Benefit Managers), which has made it difficult. In the last ten years, the regulations he must deal with, the reduced reimbursement rate, and negotiating contracts have taken up so much more of his time. It's a lot different and often frustrating, although he didn't use the word. "It's so much more than getting pills ready."

"The challenge with most insurance companies is they are always encouraging the little guys like us to go to mail orders or bigger chains." He likes to have a service for the people in rural communities. It is difficult to imagine having to travel longs distances to get drugs every time. Chris also believes the Pharmacy's support the communities, so it's existence is essential.

Every night they send a control drug report to the state's drug registry, and it is up and registered within 24 hours.

Big Sandy was a good move. We used to send drugs with a carrier, but with fiber-optics coming to Big Sandy, it allowed for tele-pharmacy, where he could in real-time see and interact with the Pharmacy Tech, Paula.

Chris said, "I love Big Sandy. It reminds me of Centerville, a small town. Everyone has your back! I am so appreciative of the people of Big Sandy that allow us to serve them and those who use our established business. I'm very proud of the store in Big Sandy and the people who work there."