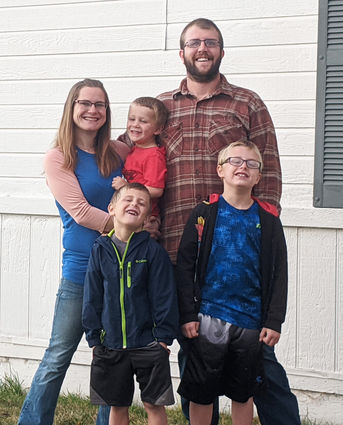 Jeramie Echols with his family, wife Jeanna, and sons, Connor, Riley and Tyler.

"It all started with my dad being in the Air Force," Deputy Jeremy Echols explained in response to my question about why he got into law enforcement. "As we were growing up, he kinda raised me and my brothers being that we live in a free country, we should do something to give back, whether that be service in the military or some kind of public service to help maintain the freedoms we are afforded. I didn't feel like the military was what I wanted to do with my life, and I kinda always wanted to be a cop when I was growing up. You always see the 'drive fast, shoot guns, that kind of stuff,' which is very little of what it is. It's a lot of just helping people that can't help themselves and that kind of stuff. That's how I got the initial push to go into it."

Jeremy has been working as a Chouteau County Sheriff's Deputy, serving Big Sandy and the surrounding communities, for nearly 5 years. He started his law enforcement career working for the Cascade County Sheriff's office as a detention officer. He worked in the jail for five years, an experience he credits with making him a better officer in the long term. Detention officers have fewer tools for dealing with difficult situations. They carry a flashlight and have the option of purchasing cuffs for work. Still, he explained that he rarely used handcuffs. For the most part, he learned to talk to people and help them solve their problems. "Generally, people were acting out because they had other issues going on. If you could help them talk those issues out... you could help them solve the real problem." This skill has translated into his work in Chouteau County, where he describes the majority of his job as helping people.

Jeremy has enjoyed his time in Big Sandy, explaining that "It's been a good community to raise a family in. It's been very welcoming. It's like a big family almost." He's found the job of Sheriff's deputy in our town equally enjoyable. The only challenge he's encountered has been when he's had to deal with people he knows in an official capacity. Changing roles from friend to deputy dealing with a problem has at times presented some more challenging situations.

Regarding the recent wave of hostility toward law enforcement officers, Jeremy explained that in Montana, as a whole, everybody has been generally respectful of law enforcement. He pointed out that this is especially true of the Sheriff's department. The sheriff is an elected position and deputies tend to focus more on serving the community in a broader capacity. They don't just arrest people and write tickets. All of the current deputies in our county are also coroners, do detective work, act as crime scene investigators, and serve in a few other roles. Jeremy explained that they do all sorts of things in the community, like help people open their cars when they're locked out, because there is no locksmith in our town. He pointed out that many police are frustrated with the recent controversies because "Good cops hate bad cops more than anybody." He feels that the majority of officers are good people and are there to serve. A few bad ones have resulted in the profession sometimes being painted with a broad brush. "It's the same as anything else, they hire people. The problem is people. It's not the profession. It's not a race thing. It's not gender. It's people. If you hire people, there are going to be people who are problems."

Jeramie has lived in Montana for the majority of his life, with the exception of about 5 years that he lived in San Antonio and Alaska while his father was stationed there. Interestingly, though, he and his wife both lived in Great Falls, but he met Jeanna while living in San Antonio. He had come back to Great Falls to visit some friends and attended a church she was also going to. The pair met and maintained a long distance friendship from 2004 until they were married in 2007, when Jeremy finally returned to Montana from Alaska. The couple has three boys: Conner (8), Riley (6), and Tyler (4). Jeremy has a wide variety of interests and hobbies, but most of his relaxation activities are dictated by his time with his wife and boys. His favorite hobbies are fishing and hunting. "Hunting and fishing are the two I always make time for, other than that, I try to fit in wherever I can find the time." Fortunately, his boys are developing an interest in both activities and are starting to go on hunting trips with their dad. The family takes a lot of fishing trips, though as Jeremy explains: "It's mostly fishing, not catching. My kids love to tangle fishing lines." He also enjoys riding motorcycles, an activity that usually starts with him giving each boy a ride around the neighborhood before he can set out on his own.

Jeremy is also a bit of a "jack of all trades." He's often helpful with repairing nearly anything or offering tips for engaging in all sorts of activities. He attributes this to a variety of odd jobs he did growing up, when he learned things, like how to hang drywall, by helping out. He also spent 2 years in high school working as a civilian employee of the Air Force in Alaska. His job was to rent recreation equipment, like boats, RVs, and camping equipment, to soldiers taking time off. This meant teaching them how to run everything and repairing whatever showed back up broken. This fit with his general enjoyment of taking things apart to figure out how they work. As a result, he has a knack for fixing just about everything.

Jeremy is active in the life of Big Sandy Church of God, serving on the board of deacons. He and his wife help out with children's programs and Sunday school. He is a blessing to the church and to the community he serves.