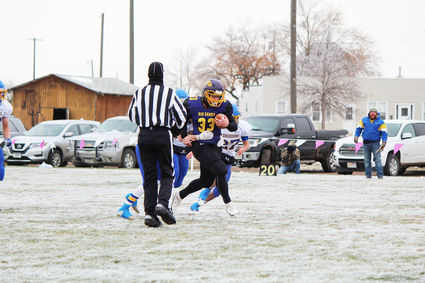 Senior, Kade Strutz (33), running in one of his many touchdowns of the game.

It's not quite the bustling holiday season but Big Sandy is already toiling away at vanquishing the Ghosts of Postseasons Past.

The first specter appeared against a backdrop of powdery white in the form of the 2018 6-Man football champs and last year's runner-up, the Wibaux Longhorns.

The Longhorns proved just a phantom of their former selves, however, and left Big Sandy with a 57-6 defeat to conclude an uncharacteristic 2-4 season.

It's not that they didn't know what was coming at them. They just didn't have the ability to stop it. Alternating doses of Kade Strutz carrying the ball to the...