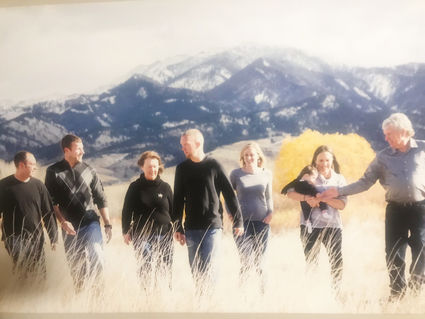 After 43 years of teaching in Big Sandy, Larry and Chris Brumwell are retiring. The couple came to Big Sandy in 1978, right out of college and have served our town for their entire careers. Chris pointed out that Big Sandy was both their first and last teaching job. The pair came to Big Sandy specifically because the school was looking for a Special Education teacher. As Chris explains: "They wanted Larry; they were looking for a Special Ed teacher for the High School. There was no Special Education there at the time. By law they had to have one, starting that year."

Larry explains the need and how they were originally connected with our school: "It was called Public Law 9142. Congress first passed the mandate that schools had to have Special Ed. So, my coach from Power actually called us while we were in Billings going to school. He was on this Special Ed co-op board in Great Falls, and that was the co-op board Big Sandy belonged to at the time. He knew Big Sandy was looking for a Special Ed Teacher. He asked, 'What does your wife teach?' I said: 'She's got a math degree with an Earth Science minor.' He said, 'I think they can probably find a position for her, too.'" Chris said that the school shuffled things around to make a place for her, because they wouldn't have come unless there was a job for both of them. Larry was also brought on as a coach, because the school needed one at the time.

The pair originally only planned on staying in Big Sandy for a few years, but then their kids started coming along. They opted to stay because Big Sandy was a great place to raise a family. The pair loved the community-minded attitude they encountered, with residents looking out for each other and for the community's well-being. They also loved the school. They were both very proud of the work they did.

Larry served the school as the full time Special Education teacher for 37 years, which is no small feat in a field that tends to have an average length of service of 5 years. Eventually, Larry took on a dual role, serving as the P.E. Teacher as well as running the Special Education program. A few years ago, he was given the option of doing one or the other full time. He opted to be the P.E. teacher, mainly due to the fact that he had grown tired of the excess of regulation and paperwork required to do the Special Education job.

Chis worked her full 43 years as a math teacher, though during the early years of raising her family, she worked part time. She also expanded her role to include school counseling after earning her master's degree from Northern Montana College, which is now MSU Northern. She explained that her continuing education work required she take classes every year, so she opted to take courses that would eventually grow into another degree. Her decision grew out of her enjoyment of the "Teacher as Counselor" class she took as an undergraduate student. Most of her school counselor role has involved helping kids select dual credit classes, apply for college, earn scholarships, and other academic specific tasks. The pair pointed out, with no small amount of amusement, that when they came, Chris was a sort of "tag along" with Larry, who took a hard to fill position. Whereas now, because of the way things have changed, Chris is the high demand teacher, and Larry has become the "tag along" to her. "There doesn't seem to be a whole lot of concern when I am going to retire. There's a lot of concern about when she is going to retire," Larry laughed.

When I asked about why they are retiring now, they told the story of a sermon they heard while visiting a church in Bozeman. The pastor had announced his plans to move to a new community and preached a sermon on Abraham's move from his home to the promised land. In particular, they were moved by the explanation that it was better to leave a few years too early than stay on too long. Afterward, the pair agreed that the sermon was meant for them. They had served Big Sandy for a long time and seen a great deal of change and growth in the community. In particular, they explained that last year's Covid related distance learning had made the decision easy. It was difficult for them and all of the teachers.

Chris and Larry plan on enjoying finishing out their last year of teaching. They are looking forward to homecoming next summer, when their children and Chris' brother typically come to town to enjoy the festivities. They will not be making long term decisions until then, though they may move to Bozeman where two of their children currently live.

Looking back, Larry indicated his proudest moments during his time in Big Sandy by describing his kids' academics and athletics accomplishments. Specifically, his son Blake's senior year when his team won state for basketball and when his son Gage won 2nd place for both football and basketball, with undefeated seasons (apart from the state championship games). Chris added that their kids got the highest quality education in Big Sandy, not just academically, but also in athletics and extracurricular activities. They grew to be well-rounded citizens through Big Sandy Schools.

Larry also cites his work in growing the Special Education program as a major accomplishment of his career. The Special Ed class originally started out meeting in what is now the school snack bar. Later, it moved into the former Home Economics classroom, where Larry started incorporating cooking and other hands on elements into the curriculum. Chris pointed to his work incorporating health education into the physical education curriculum, so the students learned a wider range of health improvement material.

Chris indicated that her personal development in relating to students is a major part of what she has accomplished as a teacher. With experience, she grew to understand students far better than she did as a 22-year old college graduate. She has grown adept at developing relationships with students that enable them to come to her with questions and issues. She also points to her instrumental role in making college credit courses available to students as a major accomplishment. This year, Big Sandy offers 27 different classes that enable students to earn college credits. She pointed out that some students graduate with more than 30 credits of college completed. This is a program that is only around 12-years old.

When asked for final comments, Larry replied: "It's been a great place to live, raise our kids. Big Sandy will always be our home." He went on to explain how Christ Lutheran Church has been a great faith home.