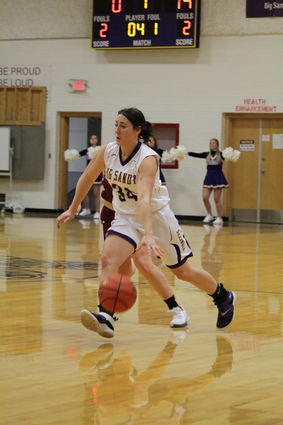 Senior Madison Terry (34) brings down the ball during game against Fort Benton.

There are no easy games in the District 9C, as the Big Sandy girls have found out again and again on the hardwood in recent years.

Though there are somewhat less challenging games than those against the Fort Benton Longhorns, who came up north and began their redemption tour Saturday. The lone blemish in a 24-1 season in 2020 left them out of the state playoffs and Fort Benton is determined not to be denied this time.

The Longhorns, led by MSU-Billings commit Aspen Giese, a senior, made quick work of the smaller, younger and less-experienced Pioneers in an 87-15 season opener victory Saturday.

Fort Benton opened on a 14-0 run in the first three minutes and change before sophomore Eva Wagoner cracked the goose egg, catching an inbounds pass from fellow soph Mattie Gasvoda and driving to the hole for two. Gasvoda would add three points from the charity stripe before halftime but the Pioneers were down 51-5 at the break.

Big Sandy tripled its offensive output in the third quarter but a running clock implemented to stop the bleeding also meant the Pioneers ran out of time before they could add to their tally in the final period.

Pioneers coach Pete Jerrel said he expects the Longhorns to be the cream of the crop in the 9C again this season.

"I don't know if North Star has enough to go after them or not," Jerrel said. "(Fort Benton) keeps you working ... they get you going faster than you can go."

While the Pioneers are again boosted by a strong turnout, boasting 20 players and the ability to have a full junior varsity squad, they have little experience at the varsity level.

Jerrel said senior Madison Terry has the most game time under her belt but the ball handling and scoring of graduated Lainey Gregory and Amanda Cline will be missed this season. The duo led Big Sandy to a 2-14 season, which included breaking a two-year long losing streak in league games. The Pioneers celebrated a long overdue 36-30 win at home against Chinook.

This season, those Sugarbeeters, as well as Chester-Joplin-Inverness, though they have each struggled in recent years, bring back virtually their entire rosters a year older and wiser, Jerrel said. They will be the opposition this weekend as the Pioneers host C-J-I Friday and go to Chinook on Saturday. 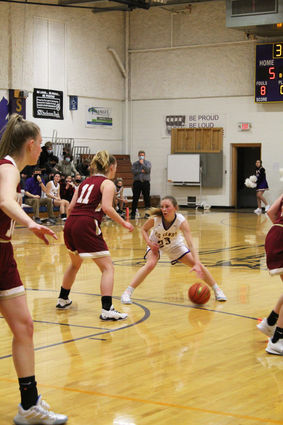 The COVID-shortened late-start season lacks any non-league tune-ups in 2021.

"Usually, you get a preseason tournament to work out some of the kinks," Jerrel said. "It isn't an easy chore but somebody has to open against (Fort Benton)."

Wagoner "is a good addition for us," he added, after playing for the freshman team at Great Falls High School. "She's a nice left-hander for us. She plays aggressive. She got some experience having to play tougher kids."

"I ask a lot of her ... trying to handle the ball, see the floor," he said. "Usually, you'd hope she could be getting some seasoning at the JV level but we have to throw her out there against juniors and seniors that have played three or four years."