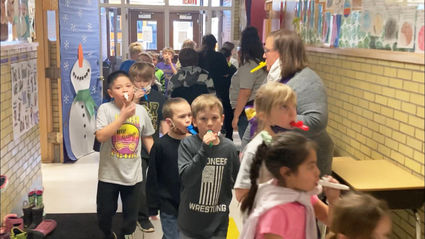 Last Thursday, FE Miley Elementary celebrated its first National Kazoo Day. National Kazoo Day falls on the fourth Thursday of January every year. The festivities began in the afternoon music classes, where Mr. TJ Bond introduced the kids to their kazoos and practiced songs with the students. Afterwards, he lined the students up at the classroom door and practiced playing and marching with the kids around the basketball courts. Finally, he spent some time playing kazoos through various instruments, like a trumpet and a melodica. Each student and every staff member received a kazoo as a part of the celebration. The 150 kazoos were donated by The Mountaineer for the celebration of the day.

Student reactions to the unusual music class focus for the day were entirely positive. Second grader Debrah Lavenger exclaimed that her favorite part of the day was "Making funny noises" with the little orange instrument she picked because it was her favorite color. Paisley Heppner expressed similar sentiments: "My favorite part was probably making the funniest sounds with them and marching around with them." Other students were excited to bring their kazoos home to play for their parents. James Calvao exclaimed: "I'm going to play kazoo for my mom. My mom is going to love it!" Ryat Phillips expressed his excitement over playing "Happy Birthday" on his new orange kazoo for his family.

Perhaps Jaxon Jones expressed the feelings of the whole class best when he asked loudly: "Who wouldn't have fun?!" before announcing his intention to blast loud kazoo sounds for his family when he got home.

The day's activities culminated in a large parade through the school, led by the 6th grade class. Students from all grades followed Mr. Bond as he led a line of classes up and down the halls as well as through the classrooms playing the school song. Along the way, they picked up classrooms full of kids who were finishing up their classwork for the day. Shelbi Darlington described her class' reaction when the parade of kazooing kids passed her door: "The kids were so excited they jumped up out of their seats to go see it."

Gearing up for the parade, 5th grader Colter Han explained that his favorite part of National Kazoo Day: "It's cool and interesting, and also it's chaos!" Chaos was the word I heard most often when discussing the parade and celebration time with teachers. Alma Terry summarized the whole activity well: "It's chaotic, and they're having a wonderful time!"

The parade started at the music room on one end of the building, picking up the 5th and 4th grades as they passed the rooms.

Turning, the parade visited the 3rd grade and Kindergarten classrooms, where 6th graders handed out kazoos to students who did not have music classes scheduled as specials that day. The long line of kids and teachers wound through classrooms and up and down the halls before the students returned to their classrooms and prepared to go home for the day. Throughout the march, students played the Big Sandy School song, though it was hard to miss the pockets of students, like Henry Merrill, who began to play other tunes like "The Imperial Death March" from Star Wars.

After the parade School counselor, Diana Upham Keane pointed out: "I love that every student participated. Even though they maybe didn't want to at first. Even the ones who were dreading it were happily smiling and marching."

Not everyone was excited for National Kazoo Day. Amy Terry, laughed and announced that she would be calling in sick for the holiday when I arrived at the school with the 150 kazoos that would be used for music classes and parade. Later we joked that she would likely steal the kazoos, like the grinch who hated Christmas. Amy explained: "I would like a national whisper day! Why didn't we celebrate national chocolate cake day?" However, with the sound of dozens of kazoos and laughing children caused her heart to grow three sizes that day. She begrudgingly admitted, "It is pretty cute."

Other teachers embraced the day with enthusiasm. Calista Worrall explained that her favorite part of the holiday is: "Kazooing! I grew up kazooing!" Mr. Brumwell demonstrated his kazoo prowess throughout the parade, later announcing: "I was glad I went to school for five years to learn to play kazoo."

When I asked a group of teachers for their feelings about the day, Cinda Pierson exclaimed: "It was very good! I especially liked the Pioneer Twist!" Heather Woolery pointed out that it was Pioneer Day before laughing out: "I love that they played the school song!"

Mrs. Worrall summed up the whole celebration of kazooing with the kids of FE Miley: "What a fun memory, though!"

The Mountaineer would like to thank the staff of FE Miley for doing the celebration and particularly TJ Bond for his efforts at planning and leading the day.