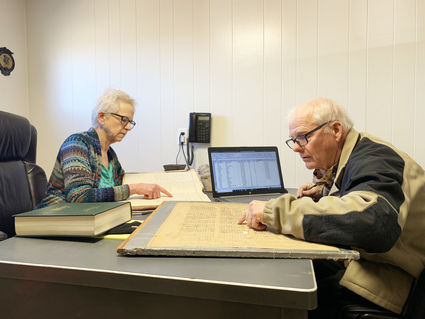 It's been a big project updating the cemeteries records into digital data. "Three years ago, we thought we could get it done between the Rotary banquet and Memorial Day. They laughed, "we're still working on it." They are about 50% done, but the last 50% will go quickly because the newer gravesites are easier to verify. "We feel very good about everything to this point. It's very accurate." They have been meeting Thursday afternoons. I asked if it was fun, and they said, "Yes. It's interesting!"

The cemetery office is small. It consists of a desk, with shelves for maps and historical data. There are three maps made up of three cemeteries. The old cemetery is on the north side and west end. The first addition is north from the building to the entrance. The second addition is everything else.

After looking at the maps, they compare their digital input to the "Holy Grail"-a large book with the names of everyone buried at all three additions.

They found some interesting information during the process of inputting the digital data. One person is buried in two places. There are two "Hobos," but only one has a name. Some individuals are buried in the old cemetery, but they were never marked on the map. We do have dimples where the ground is indented, but often there are no names. One was found frozen; another was murdered in front of the motel. There was one incident where sewer gas killed a person, and four or five people who went in to help were also killed.

After the cemetery records are made into a digital format, Rotary will finally finalize the gazebo at the cemetery.