Always a lover of animals 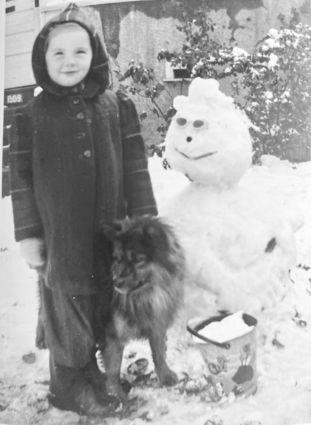 I was raised an only child but one that was expected to look after herself. That included going alone to the dentist at an early age. I was given no sympathy if I came home with bruises. I was told I knew where the band-aids were; my neighborhood comprised myself and another girl and around twenty boys-learning to look after myself gave me the courage to think outside the box. I became a little ruthless, in a good way, of course.

Our neighborhood was in a small city with open grassed areas here and there. The boys liked to go into one of those fields and catch gophers. I had my own business to take care of, so I am sure I missed some of the hunting, but when I did become aware of a hunt in the wind, I took action. My friend, Bev., the other girl, refused to take part in my stalking. I would watch the boys strutting off, intent on doing manly things. I would follow oh so quietly, a good way behind. Once to the field, they would become very quiet, eyeing their prospective victims. This is when I would go into action. Usually, yelling and clapping my hands achieved the results I strove for, but I did try a pot and spoon once. I discovered the pot and spoon really hampered my getaway, which was, of course, of prime importance. They were shocked every time it happened. There would be a collective roar of rage, and the chase was on. I had mapped out the quickest way home, given myself, some leeway plus I was fast for my size. They never caught me. Once in a while, I would check the garage where they kept gophers they did catch. I would scout the land and duck into the garage losing all captives. In the spirit of truthfulness, I must confess the boys caught me once. Not when I was on gopher duty but one lazy winter afternoon when I was a little bored. The boys had gathered at the end of our alley, and for some reason, I found it fun to go partway down the alley yelling insults at them. They would react as expected, and I would race on home to safety. Until the day I feel I must confess to began as others had, with the taunts and the escape. However, one of the boys was using his head for once, and they split up. Half of the group circled the side of my house to block my escape, and the other half pursued me down the alley as expected. I was caught!!! Smushed face down in the snow with several rough woolen mittens scrubbing my face and a few kicks. They had their revenge. My punishment wasn't so bad, I reflected as I got up off the snow, I would be more careful next time, and so I was.

My grandfather was a tough old Irishman who was a livestock dealer in partnership with my Uncle Bert. He was gruff and rough, and his brogue was sometimes hard to understand. He carried around a thick heavy cane which he whacked around when going amongst cattle. I told him that was cruel, and he ignored me. One summer day, when I stayed with him and my grandmother, he asked me to go fishing. He had never paid much attention to me, and so this was quite remarkable. I had never been fishing but accepted, hoping this would be a good time. We got to a stream rapidly running along. I was interested in the eddies of water and the plants and rocks around. Suddenly, I became aware that he had his fishing rod out and was doing something with it. Trying to be polite and show an interest, I stepped closer. What a shock. He was putting the hook in a frog's mouth. It was then I noticed a bucket by him with frogs in it.

I know not how he came to have them, but what I did know was he wasn't going to have them long. Ever watchful of the cane, I crept closer, waiting till he turned his back. With a lunge and a good shove, I tipped over the bucket into the stream. Farewell frogs and run like--well, you know. He pursued me swinging the dreaded cane, but I was used to eluding the enemy. I had his number. I knew I was faster, and I also knew my parents would not appreciate me being hit with a cane. He stopped yelling and racing after me--well, stumbling after me. We eyed each other, and it was then I think he came to the same conclusions I had. This was not a game he would win. With much muttering and dark looks cast my way, we got in the truck and silently drove home, with my hand on the door handle, I might add. Neither of us ever spoke of our fishing expedition to each other or my knowledge to anyone else. After that, we had an armed truce. I was never invited anywhere else by him, which was alright by me.

My Uncle Bert was the opposite of my grandfather. He loved children and always made sure a pony or horse was available when I came for visits. Bert constantly urged my parents to let him get me a horse to keep outside our city, but regardless of how he and I plotted, the answer was always no. I was taken around with him when he was picking up cattle, horses, or pigs. I loved it. He would caution me about safety, and sometimes I would listen. Sometimes I didn't. I was visiting one summer, and he had about six yearlings in a large corral in the barn. I assume he was to be transporting them somewhere else soon. All I knew was I had six horses close by and no one around. I had been told not to go into the corral and indeed not to try to pat etc., or they might bite. I spent a lot of time outside the corral sizing them up and talking to them. They were sizing me up too. I like to think we agreed. You know, of course, that I had to enter the corral? And so I did-several times. I remained unscathed, whether protected by God or the devil, some would say was the question. After much fraternizing between my horsey friends and me, I had a human friend arrive to spend the day. She lived in the small town my grandparents were in, and she was the same age, so it was assumed we would enjoy each other's company. Fortunately, for all concerned, we did. She was naturally introduced to the horses. She was much smarter than I and felt we'd be best to stay away from them. To my eternal shame, I convinced her otherwise. We had no sooner entered the horse's domain than she was bitten soundly in the shoulder. Blood, shock, screaming. I got her out of there and up to the bathroom. We were both being quiet as we had by this time realized we would both be in deep trouble for our stupidity--well, my stupidity. After a horrified look at the damage, I realized there was no hiding this. Parents were summoned, and my little friend was gone to be stitched up. We have kept in touch, and sadly, this has given her a lifelong fear of horses. I, the culprit, got off scot-free. My uncle shook his head over the whole situation, but I think he, unlike any other relative, knew the siren song I heard when it concerned animals and understood how strong the draw was to be with them. I think I know who protected me, on reflection, and it wasn't God.

I was allowed a dog for one year. My uncle Bert had brought it as a puppy (without asking my parents). He was such a pal to me! However, my parents decided the dog was better back in the country. I was heartbroken, I was eventually allowed a parakeet (Budgie), and I loved him dearly. However, I was intent on casting my net further concerning pets. I settled on a turtle. I asked, and the answer was no. I had figured that would be the initial reaction, but I had a plan. My birthday was very soon, and I had guests who were coming.

In particular, one friend I still have, ( Sally), made the mistake of asking what I would like for my birthday. I told her a turtle. I convinced her that her gift would be the best of the best gifts I could ever receive. Her mother asked her if my mother had said it was alright. So, I admit I lied. I knew Sally's mother. She was a lovely woman but very busy, and I counted on the fact she wouldn't check up on anything. I was right. Imagine my surprise and extreme pleasure when I got a turtle for my birthday. Sally was ecstatic as she knew she had given the best of the best gifts. What mother could squash her daughter's birthday happiness, never mind the happiness of an innocent, thrilled friend? Not mine!! I named the turtle Tippy.

My mother was sure my love of animals was a phase. I am still in that phase. She discouraged me every way she could. She would put me in a dress when we went to the farm, assuming I wouldn't ride. I have a picture of me astride a pony in my lovely summer dress. I was consistently refused another dog, so I adopted all the neighborhood dogs whenever I was outside. They were drawn to me too. I include a picture of myself with a newly erected snowman and my neighborhood buddy called Brownie. We were the best of friends. On the back of the A photograph, my mother has written," Anne with Brownie--(Roseanne's dog.)" Brownie and I thought this was not the truth, we knew who he was bonded with, and it wasn't Roseanne. I never told my mother. It would just have upset her.