Grasshoppers are back this summer 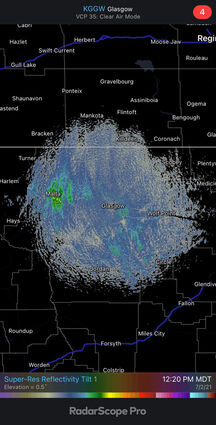 National Weather Service Rader picture, The radar is lighting up! But it's not rain, unfortunately. Just countless grasshoppers flying as high as 10,000 feet above the ground! Thunderstorm chances will increase Sunday evening into early next week, but then it looks to dry out and heat up once again.

Last week, the Animal and Plant Health Inspection Service (APHIS) completed their treatment of around 40,000 acres of rangeland southeast of Big Sandy. Their objective was to control grasshopper populations which are projected to reach critical levels in the coming weeks. The weather over the past few years has presented the perfect storm of conditions to produce massive rangeland grasshopper populations. This is particularly the case for the Big Sandy area, which has a high density grasshopper population.

"Some of the grasshoppers are becoming adults now. The first ones are becoming adults now and in the next couple weeks, they'll all be adults, so we're going to see the peak in the next couple weeks," explained Gary Adams the APHIS State Plant Health director for the State of Montana. Anecdotal stories around the community are already describing the devastating effects of the pests on crops and rangeland. Coupled with the dry, hot season, these conditions present a hard situation for locals.

"Grasshoppers tend to start like a fire. In 2019, there were places where there were a lot of grasshoppers. The conditions were just right, with the cool wet spring and lots of forage and a nice warm, dry summer. If you remember 2019, there was a lot of sweet clover everywhere, and it was kind of a lush year. All the grasshoppers lived, and they laid eggs. Then we had a very mild winter that year, and so they all hatched in 2020. Now, they are expanding to new areas. In some places, they are starting to decline a little bit, but a lot of places are still just as bad. I got a letter from a lady in Glasgow who said they've eaten all her grass, now they're eating her trees. We're going to hear more and more as they get bigger and people start seeing them."

Mr. Adams described the land treated as "...a combination of state, private, and public land. It wasn't just BLM. Sometimes, a lot of the federally managed land is rangeland and not crop land. In Montana, there's always a mixture of land so the federal land participation certainly helps pull contiguous blocks together." Over half of the land was privately owned.

The efforts should aid area farmers as well, despite the treatments only being applied to rangeland specifically. "It should protect (surrounding) farm ground, because grasshoppers, often, when it is really dry like it is, will consume most of what is on the rangeland and move on to the cropland. It should help the cropland even though we didn't directly treat that cropland."

The type of treatment employed by APHIS aims to reduce grasshopper populations with minimal impact on the environment or other beneficial insects, like bees. This requires the treatment of land during the grasshoppers' earlier development stages. "When a grasshopper matures, it goes through five life stages or nymphal stages, and then becomes an adult. The pesticide we use keeps it from going from one life stage to another. So once it's an adult, the pesticide we use doesn't affect them. The timing is important. The trick is to get it to them when they are halfway to their adulthood, and then because of the way we treat, we only treat every other swath, they have to move around and find the stuff and actually eat it. It's not a contact pesticide either, so it's a little bit slow. There are other pesticides people spray that actually kills them. We're trying to be a little more environmentally conscious by using this skip swathing and using only this pesticide so it takes a while for them to eat it and then when it comes time for them to get to their next life stage, they can't form their exoskeleton anymore, and then they die."

"There are other pesticides out there that are effective. We can use Malathion and Carbaryl, which is Sevin. We don't like it... We really don't want to use those other ones because they are a little more toxic. They also kill bees and some other stuff. If there was a major emergency, and we got pushed pretty hard, we could use those other ones," Mr. Adams explained regarding other treatment options available to APHIS for managing rangeland grasshoppers.

He was quick to point out that there are other options available to farmers needing intervention for controlling grasshoppers. "There are aerial contractors around that you can call, and they'll come and use stuff we don't have available to us to knock back those populations. It kills them on contact, we don't use that stuff."