Major Fredrick F. Terry writes a book for his children 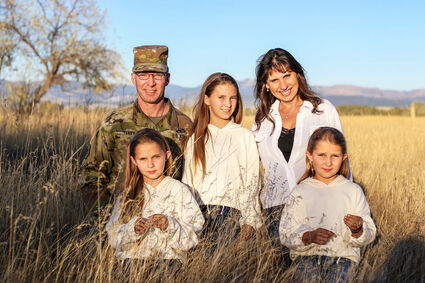 Fred Terry is the son of Floyd and Marlene Terry. He never saw himself as a writer before, but he got the idea to write a book to help him stay in touch each month, reading the next chapter to his daughters while he was deployed.

Major Fredrick F. Terry has spent over "33 years in full-time service with the Army National Guard with three deployments. He and his wife Trish have five children. Kyara-27, Jobe-25, Elisha-12, and twins Amariah and Anaiah-11. They live in Helena on a small farm as described in the book and are passionate about knowing God and making Him known through their lives and the homeschooling community in Helena."

The following was taken from the book White Paw-Beyond the Gate. "Prancer the pup has a lot of growing up to do before he is a full-fledged Farm Dog. The advice he receives from Mr. Magic, the old Billy Goat who runs the farm, and careful instruction from his Pa about how to treat the animals and use your power wisely, helps him learn what it means to be both Gentle and Strong. This helps him, as he, along with little Billy the Kid and Miracle the Chick, find fun, adventure, and danger in the Pasture behind the Barn. The Girls and Mom take good care of all animals and the farm, patiently waiting for Dad to return from another deployment, while Prancer avoids the ornery Bully turkeys, Tom and Henny. The Crazy-One-eyed Dog adds to the fun and chaos, and all the animals keep a watchful eye out for Tangerine the Fox, who would love nothing better than to take some tasty turkey or chubby chicken home to feed her pups. She might even try to feed them Prancer if she gets a chance. It is a dangerous life on the farm, and Prancer must grow up fast, learn to be brave, and become White Paw when he goes Beyond the Gate."

Major Fredrick Terry is the Supervisor IT Specialist for the Data Processing Center for the Army. He was deployed for a year, this time to an undisclosed location.

"One of the things I wanted to do was give my daughters kind of memorialized book which reserved the memory of them growing up on the farm. And to use it as an anniversary on the 27th of each month of the day I was deployed. He would video chat with his children every month on the 27th.

The first manuscript was completed six weeks ago. He printed it through Kindle Direct Publishing through Amazon. "It has a wizard; it was a quick, easy process; I think I'll do some more. White Paws-Beyond the Gate is for sale on Amazon.com.," he said. There might be a book signing in Big Sandy in August.

One of his favorite chapters in the book is the chapter about "our crazy one-eyed dog. A neighbor called him that, and the name stuck. It always makes me chuckle when I read it."

"I've been gone from Big Sandy for 30 years, but Big Sandy will always be home. It's always heart-warming to hear the stories of how Big Sandy takes care of everybody in it. The excitement when the basketball goes to divisionals."

Marlene Terry, Fredrick mother said, "I liked it! It's told through the eyes of the puppy. It's like family stories because they happened." She's so proud. And she has ordered a bunch of books, but they are sold. "It just brings tears to my eyes."