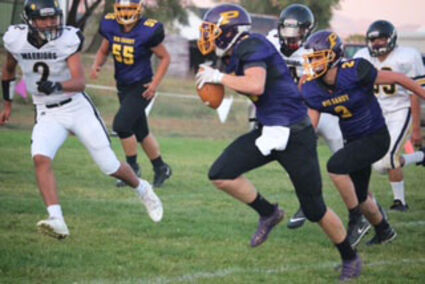 With a triumphant final score of 56-6, the Pioneer offense broke their slow first quarter pattern by putting 27 points on the board while their Defense kept the Warriors to 0. A pleased coach Jappe remarked that "Everybody got to play." Most of them got to play because there was little depth on the bench due to injuries or illness of starting players. Jappe felt, "We did alright in the first quarter this time. They persevered, and everyone got in. They don't always get in, so it's all good. "

When I asked Lane Demontiney what he thought made the difference this week's first quarter, he stated that "We've actually been trying to get more hyped during the practices and the game, so we come out ready to play football, and so we've actually stretched more as a team. We were more vocal and excited as a team to play football." I asked how he felt they did overall, and he responded that "We really did good, but I kind of wish we hadn't let them score as that was one of our goals this week. But plays happen, and we still won."

Demontiney had a great game with two deflections, two interceptions and caught two passes that he took into the endzone, so I was interested in how that was accomplished. He had high praise for his fellow teammates. "It's good when my defensive ends get back and put pressure on the quarterback, and so I got two picks. A lot of good blocking for the quarterback to be able to throw me two touchdown passes." Being a novice, I was interested to know just how he knew where to be in the moment to get those interceptions. Demontiney said, "Our coaches have done a great job. I wasn't doing that great the first few weeks at staying behind the receivers. In practice, our coaches focused on staying behind the wide receiver so you could come up in front of them after the throw and high point the ball and locate it, and know where to be. "

Obviously, that training is working for the Pioneers as there were several pass deflections by other players and an interception by Cline. When asked how he felt about the Pioneer's future this year, Demontiney stated: "I hope we make it to the State Championship." And I am sure that is the hope of all the Pioneer fans out there; at least I know it is for this one.

Warriors kicked off, and Big Sandy put the first score on the board when a 21- yard run, assisted with great blocking by Cooper Taylor, set the Pioneers up for a 21- yard TD pass from Cline to Gasvoda. Demontiney took the snap with a handoff to Cline for the conversion putting seven on the board.

The kicking team received their second penalty in the game were backed up five yards, and Cline's second attempt was successful. Demontiney deflected a deep pass and then intercepted the Warrior's second pass attempt, and Pioneers took over at the 21-yard line for another Pioneer first down.

After a 3-yard run by Taylor, Cline made a long run but was walloped, and the ensuing fumble was rescued by Taylor, giving the Pioneers another first down. A rush on Demontiney gave the Pioneers a loss, but the following pass from Cline to Demontiney brought a short gain with a third and 18-yard situation. A pass from Cline to Gasvoda brought the Pioneers to the 11-yard line and another first and goal situation. A pass from Demontiney to Rutledge put another 6 on the board, and Cline took it into the endzone for the conversion bringing the score to 21-0.

It looked like the Warriors were in the game with a 14-yard gain on their first down, but Demontiney picked off another pass attempt on their fourth down, and the Pioneers took over the ball on the 25-yard line. With Offense fouls backing them up and two unsuccessful attempts for yardage, the Pioneers were faced with a fourth and 30-yard situation and took their first time out. Coaches sent the Offensive team back out, and some nice blocking by Taylor helped Cline pick up a first down. The Pioneers picked up their fourth TD with a handoff from Demontiney to Cline; the conversion failed, ending the first quarter to a solid 27-0.

While the Warriors made a solid offensive effort, a stronger Pioneer defense stopped them, with the Pioneer Offense taking over on the Warrior 16-yard line. Three plays later, the Pioneers scored with an impressive deep pass from Cline to Demontiney. Conversion failed to bring the score to 33-0.

A kick into the endzone by Cline brought the ball to the 15-yard line. With a successful pass and an impressive run by the Warrior's receiver, the Warriors positioned themselves with a fourth and goal. After three attempts, the Warriors Offense finally made it into the endzone. Their conversion attempt was unsuccessful, bringing the score to 33-6.

Warriors kicked off to the Pioneers, but the Warriors recovered a fumble on the Pioneer's second play. The Defense went back to work against a strong offensive effort by the Warriors. However, a deflected pass by Taylor put the Pioneers back in possession of the ball. A long pass by Cline was brought back by a 15-yard penalty, but a determined Cline fired off a 60-yard bomb to Demontiney for a TD. Demontiney took it in for the PAT bringing the score at half-time to 40-6 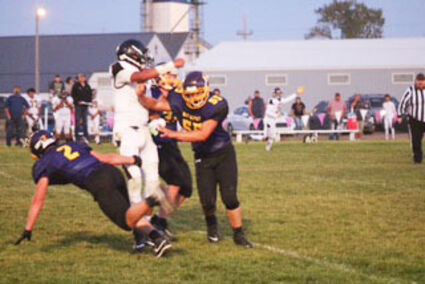 Pioneers kicked off to the Warrior's 37- yard line, and a false reverse put them in a good position, but on their fourth down, the ball was picked off by Cline, who took it 40 yards into the endzone then kicked the PAT to bring the score to 48-6. After the kick-off, the Warrior's Offense was pushed back to the 1-yard line where Sam Cox recovered a fumbled ball for a safety to bring the score to 50-6, and the Warriors were forced to kick-off to the Pioneer Offense who moved the ball back into Warrior territory. An excellent block by Darlington set up Cline for a 26 -yard run into the endzone, and the kick was not good. Score now 56 -6.

Uncompleted passes and two deflected passes by Demontiney and Taylor forced the Warriors to give the ball back to the Pioneer Offense. After a handoff from Demontiney, Taylor completed a pass to Cox, who made a great run only to have the ball stripped by Warrior's Defense. The Warrior's joy was short-lived when Freshman Sonny Philips triumphantly held a fumbled ball in the air ending the game. A great moment for Philips, his teammates, the couches, and the fans.