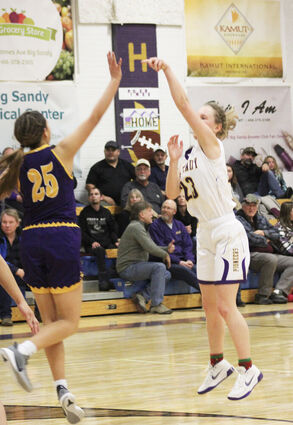 In Tuesday's contest, the Lady Longhorns jumped out to a significant lead in the first half of the game. The second half for the Pioneers was a huge improvement as they held their own going point for point. Shots began to fall for the Lady Pioneers, and the intensity of the defense increased. Sophomore Lainey Terry caught her rhythm behind the arc, going 3-3, finishing the game with 14 points. Freshman Eva Yeadon added 10 points and went 4-4 from the charity stripe. Jai Baumann added 5 points.

On Friday night, the Lady Pioneers hosted the Sugarbeeters of Chinook; In the first quarter of play, the full-court pressure gave Big Sandy the early edge in the contest. After eight minutes of play, the Lady Pioneers had the 11-9 edge. Lady Pioneers continued to battle throughout the contest but fell just short. Terry led the Pioneers scoring with 13 points, and Jai Baumann dropped in 10, Eva Yeadon added 5. Juniors Wagoner and Sant each had 4 points in the contest. Final score Chinook 52 Big Sandy 36. Saturday night's contest against the Thunderbirds of Hays-Lodgepole, the score went back and forth between the two teams, as the quarter was winding down Freshman Jai Baumann knocks in the first half of the game down a mid-range jumper to deadlock the score at ten apiece. In the second quarter, a lot of the same as the game would go back and forth. At the half, the Thunderbirds held a 22-18 lead; in the second half, the Thunderbirds hit a few threes to extend the lead, but the Pioneers continued to battle throughout the rest of the half. Leading the way for the Pioneers was Eva Yeadon with 17 points, Lainey Terry put in 10, and Jai Baumann added 6 points. Final score, Hays /Lodgepole 52- Big Sandy 37.

The Lady Pioneers look to put one in the win column on Monday against the Bearcats of D-G-S.