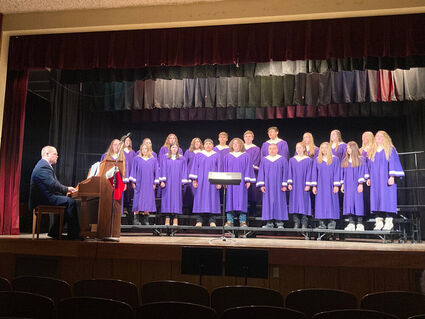 The Big Sandy Choir traveled to Bozeman this week to make a second appearance on PBS as a part of a fundraising program that features high school choirs from around the state. TJ Bond, Big Sandy's music teacher, explained the course of events that followed the 2019 appearance: They didn't do it last year due to the pandemic. But this year, they really wanted to do it, not just for the fundraiser, but also to get everyone's spirits back into the music. Very specifically, they really enjoyed our choir. We definitely did a fantastic job the first time we were there, and they wanted to have us back. I asked about song selections. There is a song we played for Veterans Day, 'The Hard Times Come Again No More." They loved the song so much that they really want us to perform it for television."

TJ commented on the second appearance for our choir: "It's not unusual (to bring a choir back), but I think it's kinda neat that last time was our first time, and they reached out to us as soon as they were able to do it again. It's neat for us as a small town. They really wanted us to come back."

The students are excited for the opportunity to perform for a television audience as well: "The kids are excited about it. Not just for the fun bonding that we get to do. It's a neat experience to go into a recording studio, working with cameras and all the stage stuff that they don't get to normally see." TJ is confident about their upcoming performance.

The song selection has drawn some particular attention from the staff at PBS: "It's a Steven Foster song. He was an old American folk writer. For the special, it matches a lot of people's feelings because we all have been going through a lot of hard and frustrating times. No matter what anyone feels about those things, everyone is experiencing stress. The song expresses that frustration well. When I introduced it to the PBS folks, they were ecstatic about it. In the emails, they gave us a list, but they said they 'really hope' we do that song. I am hoping that song will be a bit more featured than normal." TJ discovered the tune while playing a video game, Civilization 6. One of the theme songs in the game was inspired by the Foster piece. He liked what he heard, prompting him to research it and find the original. "I found and rearranged the song for the choir, along with adding a couple of extra things to make it a bit denser of a song." The choir performed the piece for the Town's Veterans Day observances. The performance prompted a strong positive response from the community. "The kids really enjoyed it too, which surprised me because it is a bit of an older folks song, but a lot of the kids said it was fun song to sing. I can't complain when the kids say that. Especially since it is an old American folk song that they've never heard before. It's not one of the old standards like 'America the Beautiful' or 'God Bless America.'"

The students will be performing at the PBS studio at MSU Boseman. They will be leaving Monday the 17th and returning the following day. TJ summed up the feelings of the choir, as well as the rest of the community in response to the news: "We're just really excited! Wish us luck and safe travels!"