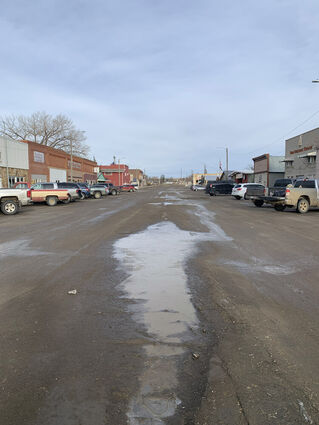 The Pivot agreement was signed again this year with 406 Agriculture for next year's contract between Chauvet and the city for the lagoon area.

In discussing the pool, it was reported that Tim made a new tarp roller for the pool. The city also did get an initial agreement with the school. The exact wording for the long-term lease is being worked on. The Big Sandy Pool committee will be meeting in March.

Chuck Williams from KLJ joined the meeting by zoom to visit about the Storm Drain project on the main street, possible grant application, and the tentative new pool.

Julea Robbins from Bear Paw Development also joined the meeting by zoom reported there will be a shortage of $98,000 for the Storm Drain project, but those funds would come from Covid B funds ($83,000), and the rest would come out of Covid A funds leaving $64,000 left in A funds.

Construction for the storm drain will begin in the first part of May.

Community Decay Ordinance will have its first public hearing Wednesday, March 16 at 7:00.

The city will be paying the tax for the old hotel for the past two years.

There was a complaint about too much truck noise, and Mayor Schwarzbach asked people to use common sense and be as quiet as possible.

The city purchased two used diesel generators to ensure the sewer and water systems have backup energy. They also purchased a used bobcat from the state surplus. These were purchased using equipment fund monies.