Pioneer Volleyball off to a winning start 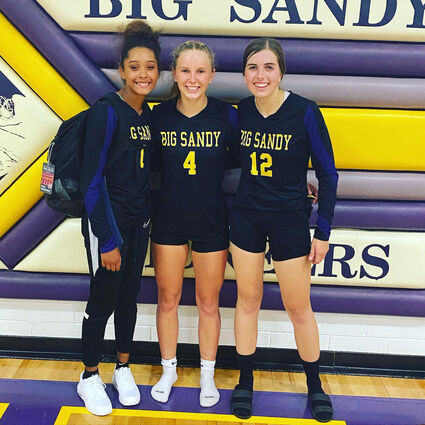 The Lady Pioneer Volleyball team won and won and won. Coach McKenney said, "What an incredible way to kick off our season! I am so proud of my girls. The defense on both sides of the court was so fun to watch. Chinook is a solid team, so that was a massive win for us."

Eva Wagoner quoted Philippians 4:13 "I can do all things through him who gives me strength." She said: "I never doubted that we would beat Chinook. It never crossed my mind. It was so exciting because everyone on the team shared the same excitement. I'm so pumped about this season. I really think our team is so strong physically and mentally."

Coach McKenney continued, "After playing hard on Thursday night, we had to turn around and do it again on Friday night. We were able to pull off a 5 set win over North Star. This was huge! We were really able to

Michael Wright, a traveling fan, said, "The Lady Pioneers battled against the North Star Knights. It was very exciting, and the girls played their hearts out. They won 3 sets out of 5 sets. You can tell that the Lady Pioneers have worked hard to be a great team, and they deserve our support to bring an excellent season this year."

As if two tough matches in a row wasn't hard enough, they then played in an all-day tournament in Belt on Saturday. The teams in their pool consisted of DGS, Cascade, Tri-City, Belt JV, and Belt C Squad. They won their pool!!!!!

"It was a long weekend for us, but we are better for it, coach McKenny said. "I was happy to have won our pool on Saturday. We are already looking forward to next week. We play in Fort Benton Thursday night and will then play in the Cascade Tournament on Friday and Saturday."